A CHURCH established by African-Australian Christians in a warehouse in one of Dianella’s “neglected” industrial zones has received a belated but conditional blessing from Stirling council.

Messianic Ministries, consisting largely of parishioners hailing from Congo and Burundi, moved into the Harold Street warehouse early this year to set up its first WA altar.

But it never asked for permission to use the site as a “place of worship”, and there has been at least one complaint about noise. 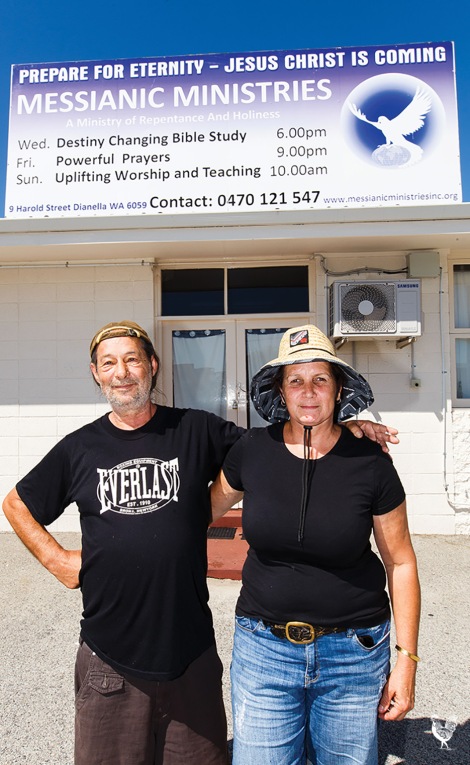 • Landlords Steven and Debbie Milianku say they need Messianic Ministries to remain as a tenant because “you can’t rent these places out. It’s hard to have a viable business here.”

Last week the council voted to allow the church to stay, with conditions: approval is for two years only, no more than 50 people are allowed on site at any one time and the space requires sound cushioning.

“The unauthorised use at the site was brought to the city’s attention as a result of a complaint alleging unreasonable noise from music being played at the place of worship,” a council report states.

The ministries’ Sifi Idrissa says the limitations are “disappointing” and she’s unsure whether Christmas plans will be cramped by the 50-person limit.

She concedes she’s not completely on top of what’s required, and will request a meeting with council staff.

A council report states the conditions are in place because of a shortfall of 97 parking bays, and potential future zoning changes.

However, two years ago the Inglewood Community Church on nearby Cleveland Street was given no restrictions on numbers, despite a 176-bay shortfall. Pastor Mark Edward concedes he’ll get “far more than 50” people coming through at any one time.

Landlords Steven and Debbie Milianku are seeking advice regarding the fairness of the council’s decision.

Mr Milianku, who ran as an independent candidate for state parliament in 2005 and as a Subiaco council candidate in 2003, says the area has been neglected for years.

“They think we’re professionals trying to fuck them over with the parking,” he says. “But they’re fucking us over. If we lose these guys, it’ll be empty for a very long time.”

The council had in 2010 wanted to rezone the area from industrial to mixed use but was blocked by the WA planning commission, which ordered further investigation.

“The council has dragged its feet since then because it was just put in the too-hard basket,” Mr Milianku says.

“We’re lucky to have these guys in here because you can’t rent these places out. I’ve had six or seven tenants go broke in the past 20-odd years. It’s hard to have a viable business here.”

Mrs Milianku adds: ”It was our dream to build high-rise apartments here and have our retirement home at the top. There would be an amazing view of the city from there.”

“I have no issue with the change of use,” Cr Irwin told the Voice. “It’s because of the parking shortfall.”

“The worship use will not have a negative impact by reduced parking bays and increased traffic through the street,” the report reads.