Each page, all 500 of them, holds a visual and written record of Knox’s most philosophical thoughts over the past five years.

Soon, the book will be turned into a 3D video game. Knox is one of up to 15 game developers using Level One, WA’s first gaming industry-focussed co-working space.

It was here, in a space on loan from SK Games on Fitzgerald Street, where he was able to come up with his video game idea.

He heard about the space late last year, when the space was being trialled: “It’s harder to do something like this on your own,” Knox says.  “You’re more motivated, and come up with better ideas, when you’re working side by side with like-minded people.” 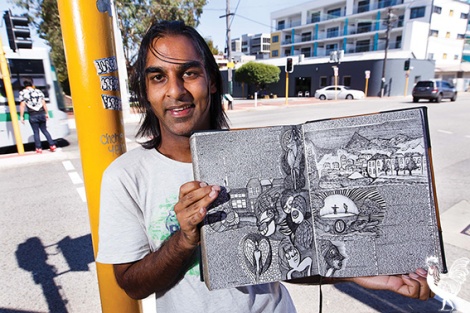 • Joel Knox is one of up to 15 game developers who are dropping into WA’s first gaming industry-focused co-working space in West Perth each week. Photo by Matthew Dwyer

Voice readers may have seen Knox sitting in a cafe, drawing in the leather-bound, encyclopaedia-like book he describes as his bible.

“I take an observation like two people sitting together at a cafe,” he says. “They’re on their phones and not talking to each other. So I write about how the world would be designed if no-one had to talk to each other: cafes would be smaller.”

The game, The Mindful Architect, would be about climbing a mountain by conquering obstacles — a metaphor for life he’s penned in his journal.

He’ll base 3D animations in the game on drawings from his book. Gamers would be able to navigate the virtual world through paths and the aim would be to try get to the top.

Kate Raynes-Goldie, director of games at FTI, the not-for-profit group behind the co-working space, says the gaming industry could become more profitable than mining in WA — if it got enough government funding.

“The aim is provide support and encouragement, and help them get exposure,” Ms Raynes-Goldie says.

The global gaming market is worth $91.5 billion, which is more lucrative than Hollywood.