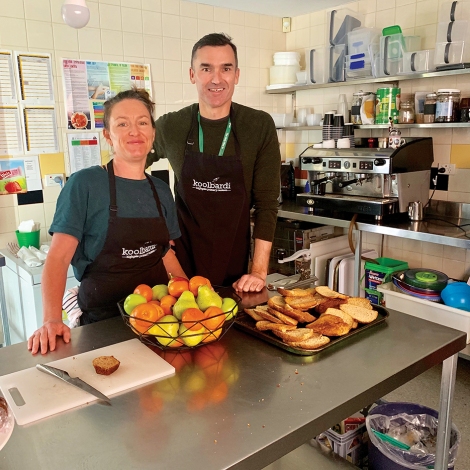 SCHOOL canteens are crying out for volunteers.

State Perth MP John Carey says P&Cs are telling him “there is a clear need for volunteers, however with both parents working it’s hard to get them”.

He’s currently working his way through a volunteer shift at every Perth electorate primary school and is seeing the shortage first hand.

“Canteens provide an incredible service to our schools, they’re a centrepoint, but we need to rally behind them.”

It’s a year-round problem, but especially in winter when volunteers (quite responsibly) have to drop out when they get the cold or flu.

A professional chef, she initially said she’d do the gig for one term, but loved it so much she stayed for five years.

“I could not do it without my helpers. It’s just not possible”.

But it’s hard to fill a roster. Ms Putland says this week “for example I had three people lined up, and there’s a big flu epidemic, and one by one they rang me. I think it’s tricky. Life is busy. When I was growing up, mums were generally at home, and now generally both parents work. So as soon as your child can be zipped off to kindy or daycare, they’re back to work.”

Mr Carey says with so much pressure on parents, he’s encouraging other family or community members to consider putting in a shift.

Ms Putland says one of her most reliable volunteers is a retired lady with no children of her own.

Ms Putland says when people do find time to volunteer, they find “it’s a really satisfying thing, it’s great to be part of a community”.

She said she’d gladly have her MP volunteer back. “John Carey was a champion! He was actually very helpful…he did all the toasted sandwiches, which is a primary school staple, and then he served at recess. I’d happily have him back.”

Canteens have changed a bit these days.

Ms Putland recalls when she was at school the options were pretty limited: “I had a blue disk for a toasted sandwich.”

Toasties are still a mainstay available every day, but with 67 nationalities at Highgate primary, Ms Putland introduced a more varied fare and added more vegetarian options.

When we called her on Tuesday it was sushi day. Wednesdays are pasta, and Thursdays they do teriyaki chicken and fried rice.