A RALLY in support of press freedom saw fewer than 50 people turn out in Forrest Place last Sunday (July 28).

There are about 300 WA journalists and 150 student journos in WA, but they stayed away in droves.

Organised by the Media Entertainment and Arts Alliance, the rally was protesting against changes to “war on terror” legislation which would make public interest journalism a crime, with the threat of lengthy jail time for journalists and whistleblowers.

Post Newspaper owner Brett Christian told the rally whistleblowers and “brave” journalism played a vital role in a healthy democracy, noting their role in bringing the truth about mesothelioma and thalidomide to public attention.

The rally was also concerned with the erosion of press freedom after June’s federal police raids on the ABC headquarters, and journalist Annika Smethurst’s home.

The News Corp political journo’s “crime” was telling Australians their government is set to change legislation, allowing police to tap into their internet accounts without a warrant or informing them. 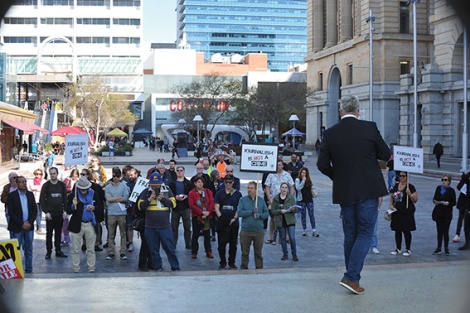 • Not a huge turn-out for Perth’s rally for press freedom. Photo by Dave D’Anger

The ABC is being investigated for reporting on alleged atrocities by Australian troops in Afghanistan two years ago.

And two weeks ago French television journalists were arrested for trespass while covering an Adani coal mine protest in Queensland.

The raids and arrests made headlines internationally.

French journalist Hugo Clément told a French newspaper he was shocked at his crew’s arrest.

“It’s a very weird thing for a democratic country.”

MEAA spokeswoman Tiffany Venning said the union had advertised the rally on Facebook, had sent a bulk email to its members, and put posters in main newsrooms and in locations around town.

Ms Venning says last Sunday’s rally was a precursor to “build a greater awareness…as much as anything, coupled with WA having a bit of an apathetic approach to most things in general, and compared to other events we have organised in the past, the committee considered it a good first step”.

Australia is ranked 21st on the index of international press freedoms, below countries like Costa Rica and Uruguay.

New Zealand is seventh and the Scandinavian countries head the list, with Norway number one.

The US is ranked 48th–behind Botswana and Chile.