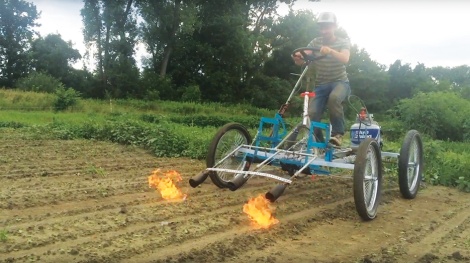 • We won’t get to see council workers riding fire buggies, like this deathtank Youtuber Rob Rock built out of bicycles and flamethrowers.

GLYPHOSATE will continue to be sprayed on Bayswater’s weeds, with instant death at the end of a 1000C flame deemed too risky.

Bayswater staffers have been reviewing the city’s weed control program after council Lorna Clarke earlier this year questioned the use of glyphosate, which has been linked to cancer during a couple of high-profile legal cases in the United States.

Although the staff report recommends a trial of steam weeding in a limited area, it found glyphosate is still alright to use as long as it’s not too close to barbecues, picnics or playgrounds.

The report noted that even the highly cautious Local Government Insurance Scheme (which tries to get councils to avoid all possible risks from dangerous hazards like tyre swings) seemed fine with glyphosate use.

The LGIS issued a statement in July saying glyphosate had been reviewed by the Australian pesticides authority and found to be “safe to use according to the label instructions”.

Staff said they’d keep an eye out for emerging alternatives, but those currently available were less effective at killing weeds and came with higher labour costs – or worse.

Flame weeding uses giant gas-powered blowtorches to kill plants in just 1/10th of a second, but the report found it posed an “extreme risk” of burning a worker or member of the public, exploding or sparking a fatal wildfire.

Pine oil is a good weed killer, but it’s an irritant that can cause permanent eye damage and smells like Dettol, which prompts diligent residents to call up and report a chemical spill. It can’t be used anywhere near waterways either, so it’s not great for a riverfront council.

Steam weeding has been trialled in Bayswater before, and is part of Fremantle council’s repertoire, but can actually backfire and cause new weeds to germinate. It can only be used on kerbs or footpaths because it’s as indiscriminate as a drone strike and costs more than three times as much as Roundup.

Councillor Michelle Sutherland was one of four, along with Barry McKenna, Steven Ostaszewskyj and Filomena Piffaretti who opposed the trial, saying glyphosate was well tested and widely used.

“Anything’s toxic if we use a lot of it, but I don’t want to go overboard and cost ratepayers a bomb over this issue,” Cr Sutherland said.

In July, 500 Bankstown council workers in New South Wales stopped work in solidarity with six colleagues who were ordered to use glyphosate.

As the bins went uncollected, the council eventually agreed to trial an alternative weed control method.

There are two pending legal cases in Australia against Monsanto, which manufactures Roundup.

One response to “Explosive decision on spraying weeds”