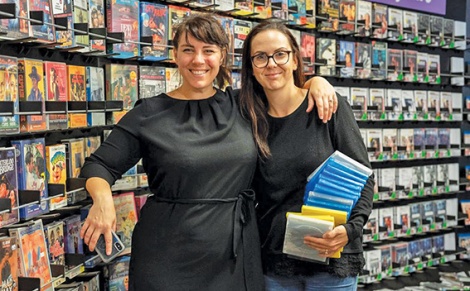 A LOCALLY produced tale of a Mount Hawthorn video store has taken out the grand prize and three other awards at the Canada Shorts film festival.

The Throwback was part of the 2019 film project organised by Vincent council and Revelation film festival and told the story of Melanie McInerney’s dedication to keeping her Network Video Mount Hawthorn store operating in the face of the online streaming revolution.

The selection committee told the Voice via email The Throwback was “a beautiful documentary about a beautiful human being: Melanie McInerney loves her work as much as all the customers she encounters.

“This film isn’t just about a small business’s fight against a dying era, it’s also about kindness and how even the smallest actions can really make a difference.

“Bertoncini takes great care in the construction of this film. Her attention to detail is amazing. From the dreamy flashbacks to every perfectly selected interviewee, all cut together in perfect harmony. The director has a clear understanding of people and their emotions, which is the heart of the film.”

Bertoncini said the win came as a happy surprise, as she hadn’t realised producer Jenny Crabb had entered their film in the festival.

“I wasn’t sure how well it would travel, because it is a very local story made within the City of Vincent,” she said.

“But what I think does translate is the idea of community, the idea of doing stuff for other people… for it to work overseas is pretty exciting.

“I’m so thrilled with what they said about Mel because it is so true. She’s such a good person; I haven’t met many people that do things for other people for no reason.”

The Throwback was Bertoncini’s first shot at directing a short documentary (she’s usually a producer) and she’s now in the planning stages of something a little longer.