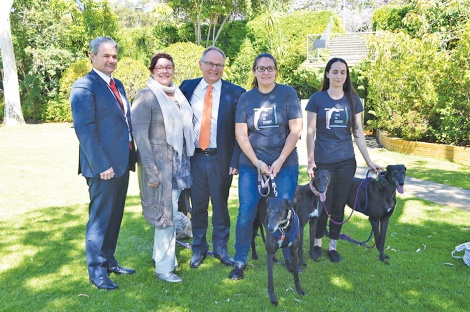 • It was tricky getting even three out of four of these rescue greyhounds to stand up for a photo with Forrestfield MP Stephen Price, Maylands MP Lisa Baker, local government minister David Templeman and Free the Hounds members Alanna Christiansen and Andrea Pollard.

A LAW condemning greyhounds to a muzzle while out in public is to be scrapped.

The McGowan government is currently reviewing both the cat and dog acts, and after receiving thousands of submissions calling for the muzzle law to be revoked, has announced it’ll go in 2020.

Maylands Labor MP Lisa Baker says it’s a big win after a long, personal fight to get the law changed.

“Over the last three years since we’ve been in government we’ve been working with the rescue groups to improve the lives of greyhounds,” Ms Baker said.

“While I personally might prefer they’re not raced, there is an industry in WA and we need to look after dogs who are not able to race and dogs who’ve retired.”

Andrea Pollard from Free the Hounds is currently in Ireland at a conference on muzzling greyhounds (Ireland is the only other country with a similar law).

Writing from Dublin she says it was a small step forward towards “a world without greyhound racing”.

“A world where dogs can just be dogs… many happy tears were shed by rescue greyhound owners all over WA and party plans made for when the legislation passes!

“Greyhounds are gentle, loving dogs and muzzles give completely the wrong impression of them.

“People assume they’re aggressive when most greyhounds are the exact opposite! With so many greyhounds needing homes this change will really help more greyhounds become the loving family members they were always meant to be.

“I’ve had my greyhound Misty for seven years now and this change means so much to me. Misty is the most gentle-natured, chilled out dog I’ve ever met and to see people at the dog park pull their dogs away from her when they see her muzzle has been really disheartening.

“This change gives her the same standing as other dogs — just like all her other friends at the park.”

Under the new rules registered racing greyhounds will still need to be muzzled.

Under the old regime greyhounds could only become muzzle-free after a daunting four-day behaviour test.

It cost $175 and took them out of their home environment, making then automatically more nervous.