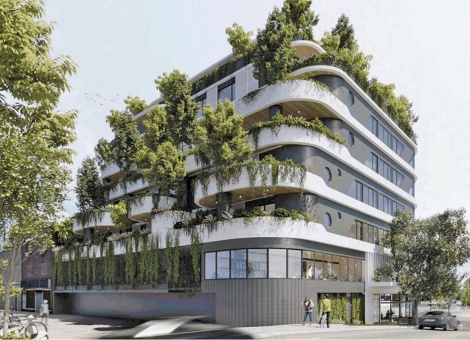 It was heralded as bringing a huge tree canopy to Beaufort Street, but the green dream was too heavy to make it into reality. Designs by Baltinas Architecture.

NOT cancelled, just delayed: the replacement eight-storey building for the old Beaufort Street laundry is still in the pipeline, just with fewer big trees.

The first version of the Baltinas-designed block was approved by Vincent council a year ago. The apartment/shops/office combo was lauded for its luscious greenery and seen as a vote of confidence in Beaufort Street and a part of the strip’s recovery.

A year on the old laundromat hasn’t been knocked down, but the development is still on the way.

A rejigged application now asks for another half metre of height so the developer can fit acoustic padding between the floors, and the new one will only have smaller trees growing from the structure.

The big trees were cut due to weight concerns from water accumulating in drains, and to keep down future strata costs of having to replace big pots if giant roots bust out.

One local who weighed in during consultation said the big trees were “part of the initial attraction”.

A few councillors seemed a bit glum about the denuding when looking over the new plans at this week’s council briefing.

Mayor Emma Cole said the amount of greenery was “quite a signature of this particular development”.

They’ll decide whether to endorse the replacement designs on June 16.