NORTH Perth people are centre frame in a new project which chronicles 10 of the suburb’s characters.

The suburb’s town team North Perth Local’s put together the “People of North Project” with some funding from Vincent council and help from the library’s Local History Centre. They brought in journalist Kate Ferguson to photograph and interview 10 community champs who enrich the area just by being around.

NPL’s Renee Jefferys tells us the idea came about because “we felt like there are so many great stories… people who’ve done some great things and had some great influences both in business and in the community”.

Two well known faces are out so far and they’re releasing the others over the coming months via the website at northperthlocal.org/people-of-north-perth 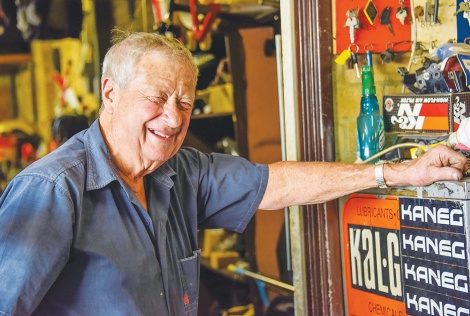 Jim’s been working on Angove Street for nearly 70 years, having started working at 14 at Pal & Panther Cycles in 1952.

He worked for owner Cyril Collins, eventually buying the business in 1980 and expanding it to selling and servicing motorbikes and lawnmowers.

His son Craig and daughter-in-law Karen had been involved since the 80s and in 2004 started their own business “Motorcycle Pit Stop” in the same shop while Jim focused on the bicycles.

A third generation joined soon after as his grandson Jamie started his motorcycle mechanic apprenticeship there. Jim only had a brief retirement before missing the shop and coming back to join Motorcycle Pit Stop.

“My wife died 10 years ago, with cancer, which was the worst thing that happened to me in my life.”

He took some time off but said he “didn’t like it.

“Me son who ran the business, and [daughter in law] Karen, when me wife died, said ‘come and do a bit of work’ and I’ve been here ever since.” 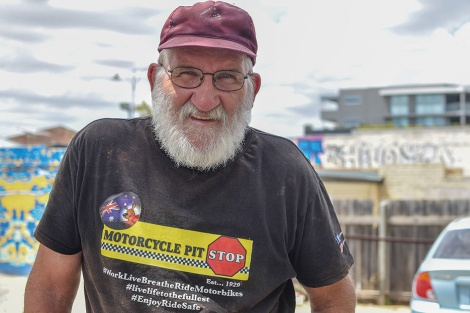 Many people around town will have bumped into Dave while he’s taking the bins out for local businesses.

But he says “I’m getting older.

He’s seen a lot of change over the years as his suburb turns more urban.

“You’ve got all these big buildings going up, all these townhouses.

They just keep to themselves.”

Photos and interviews by Kate Ferguson.