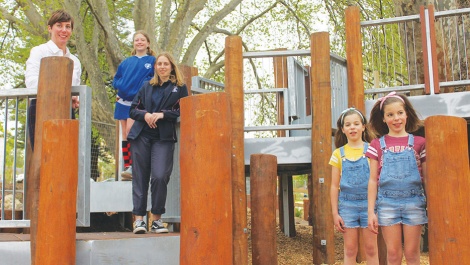 • An unofficial first play before the fences came down this week. Photo by David Bell.

BANKS Reserve playground reopens in time for the school holidays with the first playdate set for Friday September 25.

After months of Covid-enforced playground closures and then works taking longer than expected with gas pipeline-related complications, the finishing touches were being put on the sprawling mixed-age nature-based playground week.

Mayor Emma Cole tells us “after a pretty tough year all round, people are really excited about it”.

She says the focus was “to make sure there’s something there for all ages,” with play equipment for younger kids, nature play for the adventurous, a skate and skooter area, and a ballgame court.

The previous playground was Vincent’s oldest, with some bits dating back to 1992, and it’s memory will live on in the new version.

“We had a local 11-year-old who grew up with the old playground and she had lots of really happy memories,” Ms Cole said.

“She said it would be nice to have

a nod to the old playground and we thought that was a brilliant suggestion, so there’s a little wooden bridge that works well with the natural elements that’s been kept.

“[The playground] weaves through the trees and down the bank, and we’ve made it a lot more accessible now, we’ve put in a footpath down the bank and we’ve got this fantastic area for people to meet and have barbeques.

We dropped by this week for a pre-opening peek and the reviews were glowing, with the kids saying they’d plea for their parents to bring them back on the opening day.

The project already had the $500,000 cost assigned as part of the 2019/20 budget and the tender closed last December, pre-Covid, so it went ahead as planned.

If your copy of the Voice was delivered early you might still be able to make the opening at 3.30pm September 15.