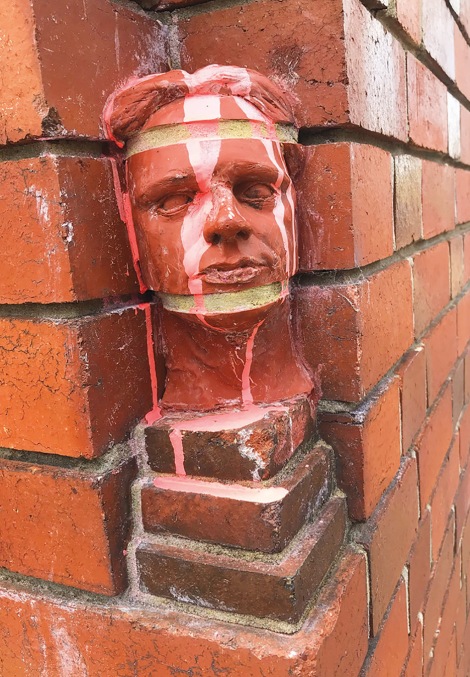 Heads up! Can you help?

I AM puzzled by a small image – a human face – in the brickwork of The Old Swan Barracks, corner of Francis and Beaufort Sts. Northbridge.

Can anybody tell me how long it has been there, who put it there, and who is depicted?

Mike Roeger
Maylands
The Ed says: If any readers help Mike out with some information, please let us know at news@perthvoice.com

OUR Little Dove: the Duyfken: Another victim of Covid-19?

The WA state government has and is finding what appears to be never ending amounts of money for roads and new home building.

But in June this year amid the pandemic it decided that our amazing Duyfken replica was not worthwhile to fund?

And funding has ceased.

If just 14 WA homebuilder grants were given to the Duyfken Foundation, it would cover the entire upkeep of the vessel for a year.

Perth lost the Endeavour to Sydney and now we lose the Duyfken.

Our Little Dove is to leave very quietly with no fanfare.

With care but in a forlorn, sad way the spars are tethered to the deck and soon she will be ungraciously stacked on a ship for NSW.

What a calamity for Fremantle, the Swan River and all people of Perth.

We lose another local tourist attraction and a valuable treasure, likely never to be reconstructed here again.

Come on Mr McGowan, surely there is funding for this wonderful ship.

Elephant in the room

WHY is it when we hear about changes that people think need to be made to combat climate change (loss of habitat and extinction of many species they only talk about about trying to deal with the symptoms not the cause of the problem?

Like those who are concerned enough to write an open letter to the premier, no one is brave enough to mention the reason for the crisis.

The world population has increased more the seven-fold in just 100 years; in fact we now have seven times too many people for the planet to support without the loss of most the natural habitat.

It is overpopulation that is driving climate change, extremes of temperature hot and cold, pollution, denuding of rain forests, over-fishing the oceans, increased poverty and the resulting conflict.

None of the items listed in the letter could be sustained for long.

When people are starving it won’t matter to them if there are protected areas, reserves, parks or fishing or hunting bans; we have seen how easy it was for all the good laws protecting the environment in the US  to be overturned in one sweep.

We are all on the one rock flying through space; whatever happens on one part will affect the whole.

I WOULD like to ask readers if they have any pictures in their possession by Chester Silverlock.

Mr Silverlock lived in Cornwall in the UK from around 1920 until his death in 1953.

He specialised in watercolours of the local coast and harbours.

As a young man in 1904 he travelled to Fremantle where spent six years as a gold prospector, and two of his pictures, which may have been painted when his voyage took him via the Nile, are in the collection of the National Trust at Coleton Fishacre in Devon.

It would be great to find out if he painted any pictures while in Australia.

If you have a picture of his please contact me via my email johnhusband02@gmail.com. If you could attach a photograph of the picture, that would be great!