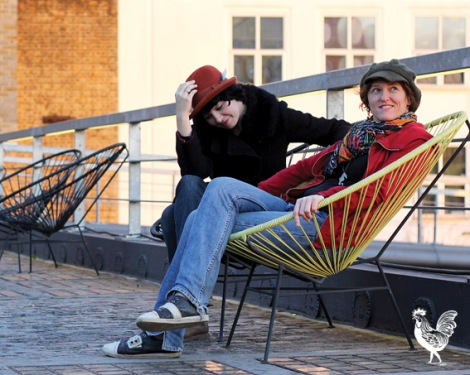 THE gals from Hussy Hicks rounded up some of their fave musicians, stocked up on some duty-free scotch and produced an album in five days.

The Gold Coast-based duo of Julz Parker and Leesa Gentz were in the middle of a gruelling European tour, which included playing everything from beer tents in Germany to festivals in Sicily, when they’d found themselves with a rare few days off in London.

They decided to jump into a friend’s new studio and, less than a week later, the Hussies had recorded London Calling.

“It’s funny because at the beginning of the project you think ‘wow, we have so much to do and nowhere near enough time…’ but then you get totally absorbed in the process and end up doing 16-hour days, one after the other until it all finally comes together,” Gentz says.

“The rhythm section we used are long-time friends (and incredible musicians), but it was the first time we’d ever really had the opportunity to collaborate, so we’d play through the half-written songs and see where we could take it together.

“Andy Schrav who co-produced the album is a wonderful artist in his own right and really added some magic with his keys and violin parts. It was really an unforgettable experience.”

The Hussies, formed in 2004, have become well-known around the traps for a unique take on the acoustic roots style, with a tinge of blues, folk and jazz thrown in. While the sound may not be genre-defying, Gentz jokes not too many bands can lay claim to playing “schizophrenic progressive folk”.

“Genre is one of the most difficult things for us to get a handle on,” she says.

“Julz and I come from such different musical backgrounds and we take influences from so many sounds and musical styles that it really is hard to narrow what we do down to a one-word description.

“There are huge stylistic jumps throughout the 10 songs on the new album but we felt that since we’d recently released a live album we had a little more freedom to play with some new sounds and take a small deviation from our signature style.”

The Hussies play Clancy’s in Fremantle on May 3, armed with songs and stories from their globetrotting sojourns. The duo is also bringing an entire rhythm section.

While playing with a band comes with its challenges, Gentz says it’s a chance for Parker, who’d trained under guitar virtuoso Phil Emmanuel, to show off her musical prowess.

“The best thing about playing with the full band line-up is that Julz gets to break loose on the electric guitar which has become a bit of a rarity over the past few years,” she says.

“It’s also a bit of a challenge, because we’ve become so comfortable playing as a duo or trio, we never work off set lists or structure our sets, but with a band it’s completely different.

“We’ve been having a ball playing the new songs, really can’t wait to get back on a festival stage and belt them out.”