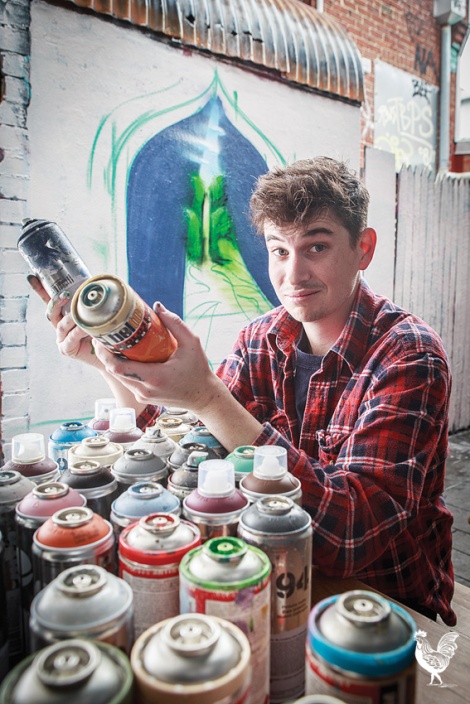 • William Heerey, back in town. Photo by Jeremy Dixon

Like many of us growing up in the 1980s and 1990s, William Heerey was saturated by American TV and movies.

Your morning cartoons were Teenage Mutant Ninja Turtles, you pretended to be Robocop at school, playing with toy guns, and then headed home to watch Back to the Future on VHS.

When the Perth-based street artist closed his Last Chance studio and moved to Brooklyn 18 months ago, his memories collided with the real experience that is modern America.

“The idea of America was a fantasy,” he says. “I’d only seen it in these TV shows. Nothing really compares.”

He expected to find rap music on every street corner but showed up in New York to find venues playing rock music and grunge.

The people, too, brought on a bit of culture shock.

“You get used to being harassed, that’s why everyone walks faster there,” he laughs.

“Everyone in New York is on a hustle to better themselves. It was hard to make friends there because everyone’s on their own grind.

“The tall poppy syndrome is just not there. If someone sees you doing well, they want to get on your back to better themselves.”

Now he’s back in town for a new exhibition, Welcome to the World of… by Daek William (his artist ego).

The works draws on childhood memories with images of ships from Star Wars flying past the Ghostbusters HQ, or a sub-machine gun slathered in fast food stickers.

Heerey also wanted the work to be interactive, with scratch-and-sniff and hypercolour elements worked into the pieces to encourage people to get more involved than just having an idle gander from two metres away.

He’s used to having his work interacted with, but in a different way. Usually when Heerey throws up a mural he knows the work will disappear before long, with someone else coming along to paint over it.

“It’s the experience of actually doing the painting, rather than the final outcome,” that’s important, he says.