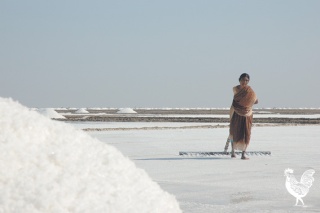 Maggie Baxter was saddened but not surprised by the death of more than 1000 Bangladeshi textile workers when a factory in Savar collapsed in April this year.

The textile artist and former manchester manufacturer was aware some of fashion’s biggest names used factories which paid workers a pittance and crammed them into claustrophobic, dangerous sweatshops. The clothes they bought were on-sold for big bucks.

Baxter says there’s a better option; she works with Shrujan Threads of Life, a collective where craftspeople from an isolated region of India dictate their own pay. Shrujan is based in the Gujurat city of Kutch near the border with Pakistan.

“I don’t work with factories, I work direct with villages,” Baxter says.

“I don’t give them a price, they give me a price.”

Originally an independent kingdom, Gujarat managed to keep at arms-length from the English colonials and it was only after India’s independence in 1947 that it was roped in as an official state. It’s isolation because of a surrounding salt desert, and centuries of immigration from countries like Afghanistan, Russia and even Greece has resulted in crafts with a distinctive look and feel.

Baxter was intrigued by the unique crafts and incorporates the work of three villages in her art, including the traditional embroidery of the region’s women, the weaving of Hindu men and block printing and dying used by Muslim men.

Religious tensions that flare up elsewhere in India aren’t seen in Kutch where each group relies on the other, Baxter says.

A sculptor by training,  Baxter is happy for others to do the sewing for her textile art pieces.

“I hate sewing…which is odd to me even now that I have got into this.”

Her ill-fated bed linen business led Baxter to Kutch more than 20 years ago. It failed but the friendships didn’t and she returns several times a year.

While the craftspeople use centuries-old techniques, Baxter’s art has a modern twist. It balances her minimalist approach with the bright, in-your-face designs of the Indians.

Block printing is done using a mud paste on cloth then coloured with dye made from iron filings. Some of the pieces can be worn, including a stunning shawl and a series of knitted collars made for a Japanese exhibition, while others are designed as wall-hangings.

The Unbounded Line is at Gallery Central (Tafe), Aberdeen Street, Perth until July 27.

Baxter will talk about her work, and Kutch, in a free floor talk Saturday July 6, 2pm.