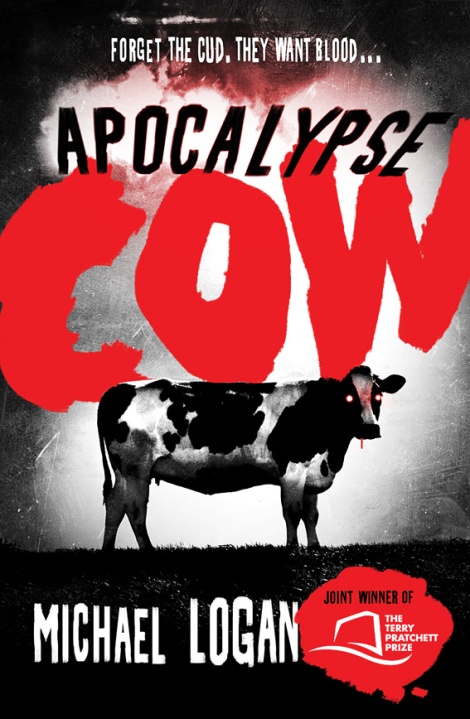 Just when you thought every last drop of green blood had been squeezed out of the zombie genre, along comes Michael Logan with Apocalypse Cow (Forget the cud, they want blood…).

The novel’s a satire about cattle transformed into human-eating zombies, after a secret government bio-weapon goes awry.

Only a twisted Glaswegian could write about heifers stomping about Britain, munching on nubile girls and having sex with lollipop men.

“I have always loved zombies and wanted to write a light-hearted novel in the genre without being repetitive.

“It struck me that nobody had done zombie animals, which struck me as a little odd given that most global pandemics that are supposed to wipe out the world start with animals (SARS, bird flu, etc).”

Logan’s debut novel is a testament to the dark British sense of humour—the penumbra between uneasiness and laughter.

The kind exemplified in UK TV shows The League of Gentlemen and The Thick of It.

“It can often be difficult to tell whether somebody is screaming abuse at you or telling a joke.

“Sometimes they seem to be the same thing.”

Logan made his fiction-writing breakthrough in 2011: As joint winner of The Terry Pratchett first novel award he was given a publishing deal.

For many years, he was an author trapped in an engineer’s body.

He spent his 20s working as an electronics engineer in the gloomy central belt of Scotland, satisfying his creative urge by playing guitar in bands and drinking lots of beer.

On turning 30 he started to dabble with fiction and quickly found recognition when a number of his short stories appeared in literary journals.

Buoyed by success, Logan moved with his then-partner to Budapest and tried his hand at journalism, learning Hungarian and working at The Budapest Times.

“I felt no love nor particular natural aptitude for engineering, so getting out to do something I loved felt wonderful,” he says.

In 2008, he and his wife—who works in humanitarian aid—relocated again to Kenya.

Logan, who still works as a journo in Nairobi, says African culture is a great muse.

“The thing I love the most about Kenya and the wider continent is that everything is changing so quickly,” he says.

“There is chaos and energy and a loose attitude towards rules, which creates a sense of freedom you don’t feel in developed nations.

“It is definitely stimulating.”

Apocalypse Cow was released in Australia this month.

(The Ed says: Pedants may recall the 2006 NZ flick, “Black Sheep”, about killer sheep feasting on people but of course they were mutants, not zombies.)