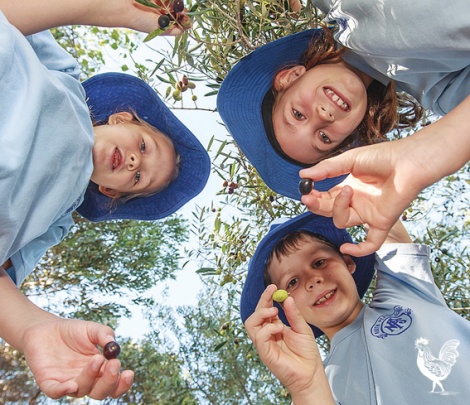 • Jack, Amy and Tilly with some of the 1000kg of olives picked from local trees. File photo

The olive oil collected by North Perth primary kids from local families has won silver at the royal show.

After a callout from the P&C on the front page of the Voice, locals offered up their olive trees for the harvesting weekend in May, with kids collecting more than one tonne of fruit.

Harvest 6006 was entered alongside 152 competing oils. Most others were from commercial producers.

A local family donated the bottles, Allmark in North Perth the labels, parents designed the logo and Vincent council picked up the olive-pressing costs.

The royal show’s premium produce judges described the oil as having “tropical and nut aromas. More green vegetable-like on palate, with subtle bitterness”.

The school was the only community group to pick up an award this year, and theirs was the first entry from a school in the competition’s history.

Rapt P&C president Kirstyn Johnson says the community response had been overwhelming, showing the area had a tight-knit local spirit.

“North Perth primary school plans to pick and press its own olive oil again next year, planning a bigger and better harvest and a gold medal.”

The secret to the perfect mix may have been the variety of olives: “We picked without prejudice, big, small, round, distinctively kalamata-shaped, and, because we knew no better (and were relying on child labour) not even the green ones were left behind”. The youngest picker was a one-year old who picked up strays from the ground, wasting not a single fruit.