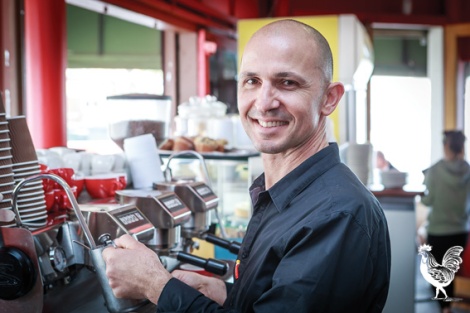 • John Rifici at his Maylands cafe. Photo by Jeremy Dixon

In June Mr Rifici—along with staff and customers, including a nine-year-old girl—barricaded themselves inside after a gang tried to smash its way in with rocks. A staffer was king-hit, a customer punched and bottles hurled in the attack on Rifo’s Cafe at the corner of Guildford Road and Eighth Avenue.

The traumatic incident has inspired Mr Rifici—who’s run the cafe for 14 years—to seek election to Bayswater council next month: “The council needs to do more to address the growing anti-social behaviour in Maylands,” says the 50-year-old father of three. “People are scared to cross the park near my cafe, because groups of people are camped there drinking and shouting abuse.

“Street drinking, begging and brawls are regular occurrences in the area, especially around the hospitality strip.”

He is pushing for CCTV on Eighth Avenue and a heavier on-the-ground police presence in Maylands to deter yobbish behaviour.

In recent years, Maylands’ traders and residents have been plagued with anti-social behaviour. Last year council rangers reported, “a significant increase in the number of reports relating to anti-social behaviour in and around reserves at the Rise, Grand Promenade Reserve, Halliday Park and Pat O’Hara Reserve”.

In response, mayor Terry Kenyon held a crisis summit with WA police and others to brainstorm an action plan.

Despite living in North Fremantle, Mr Rifici believes he has the pulse of Maylands, having worked at Rifo’s seven days a week for 14 years.

“Being a cafe owner you talk to everyone from all walks of life and get a really good feel for the area,” he says.

Before opening Rifo’s, Mr Rifici was a hairdresser for 20 years. If elected he will join another ex-coiffeur, Cr Sylvan Albert, on council.