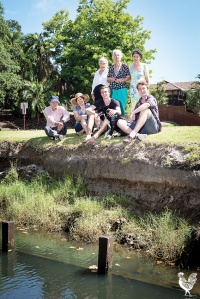 WALTERS BROOK in Mt Lawley is getting a $173,360 facelift following years of campaigning from a local environmental group.

The Swan River tributary—effectively a Water Corporation drain—has been heavily eroded by fast-running water and contains little of its original vegetation.

“In 2007 a truck crashed at the nearby Mt Lawley subway and engine oil spilled into the brook and straight into the Swan River,” she says.

“A few birds died, so hopefully the restoration will shore it up and help to avoid a similar incident.

“It took a while to get things moving on the brook because we had to consult with so many stakeholders, including the former Swan River Trust, Noongar people and the Water Corp.”

Since forming in the mid-‘90s, the BPGA’s lobbying has secured a children’s playground and restoration of the foreshore at Banks Reserve.

Vincent acting CEO Mike Rootsey says stabilising the banks will make the brook safer for children at the nearby playground.

Restoration work is scheduled to start this week and will take five months.