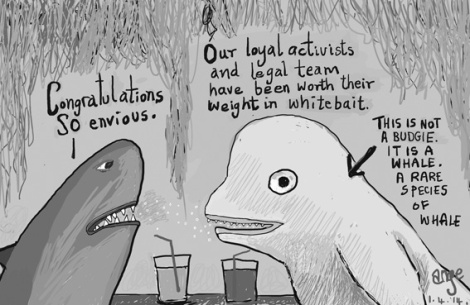 A club of champions
I WAS rather incensed to read that 75 locals had signed a petition against the redevelopment of Menzies Park (Voice, April 5, 2014).
Menzies Park has been the home ground of The Cardinals junior football club for more than 50 years to my knowledge. How can 75 people sway the council to move it? This club has produced some very fine league players for West Perth.
As for “noise, cheering  and jeering permeating your home” when has this started?
The club has been there longer than most residents, I feel sure. How will the children who attend Mt Hawthorn school get to training when the club moves? Walk? I think not. Parents may still be working and it could mean some children have to drop out of the club. How sad.
I know we must move with the times and progress will happen. Perhaps for the good.
I have  many happy memories of my time with this club and the good sporting values it gave my sons.
Helen F Jelleff
Joondanna

Google it!
YET more attempted junketeering (Voice, April 5, 2014). Will we ever learn?
What ideas likely to emerge from a conference in Denmark on cleaning up our cities cannot be picked up by electronic means?
The only people likely to benefit directly from a foray to Copenhagen in the northern spring will be Limnios and Forster.
Perth ratepayers—suckers yet again.
Ron Willis
First Ave, Mount Lawley

The burden of power
MARK GREENSHIELDS (Voice Mail, April 5, 2014) takes exception to me questioning the underground cables proposal and tries to portray me as a villain.
He says from his point of view “it is not about the money”. Yes, it is! Greenshields may well be employed in an occupation allowing him to take $8500-plus from his account to give to the council, but there are others who think this is a scandalous amount to force on owners.
In the initial survey just 11 of 129 owners were prepared to pay up front. There were 32 who opted for paying over five years. I soon discovered many of them thought they had no option; that the project was going ahead, so they delayed payment for as long as possible. Owners who object include pensioners, single mothers and some on modest incomes.
Does Greenshields believe these people should be forced to pay for a project that is a “want”, not a “need”?
If Greenshields does not understand the burden this payment will be on some, then ask him to consider this: divide the amount requested of Vincent council by the number willing to pay. Assume 50 owners are willing to pay for a cost of almost $1 million. The cost for each would be $20,000. Then ask those people if they would be willing to pay that sum. If they wouldn’t they would start to understand the financial strain on those who cannot afford $8500. Many prefer to spend their money improving their own home, or paying off their mortgage.
Finally, Greenshields states, “it’s about our local community and what are we prepared to give back to this wonderful precinct”.
So, if it’s not about money and about what he is prepared to give back, ask him and others in his street with similar views to pay for the cost of the underground cables in Brookman Street.
In that street there would be an improvement: I am sure other residents would not object to such community generosity.
Roy Gilbert
Lake St, Northbridge

Retired reincarnation
ZATUL RINPOCHE, a revered and much loved leader of the Tibetan community in WA, recently announced his retirement from all political activities to concentrate on his passion for humanitarian work.
Born in Llasa, Tibet in 1941, he was recognised as the reincarnation of Zatul Rinpoche at a very young age.
He received monastic training until he was 19 but with the Chinese invasion and violence against Tibetans increasing at an alarming rate and a close relative killed, he and his family escaped to Nepal to become the first refugees from western Tibet.
He has held many positions in service of the Tibetan community in both Switzerland and Australia and this included a period as the representative in SE Asia for His Holiness the Dalai Lama. He has been the president of the activist Tibet Action Group since 2008. A dinner was held in his honour recently.
June Lowe
President, TAGWA

Bit fishy
A MONTH or so ago the activists were telling me the baited shark lines would attract sharks. Today we have a great white cruising up and down the coast passing at least five baited lines and now we are told, looks like they’re not interested in the baited lines, this is not working, so next week we could learn they’re vegetarians. Please, let’s be consistent.
SM Livingston
David St, Yokine