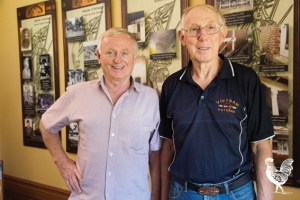 A SUNSET service will be held at the Anzac cottage in Mt Hawthorn to honour fallen soldiers.

The cottage was originally built as a memorial to those who died at the landing at Gallipoli on April 25, 1915, but now serves as a salient reminder of soldiers who also died in subsequent conflicts.

At the time, no soldier had been selected to live there: Private John Porter was the lucky one.

“He was wounded on the 25th of April, 1915 and he was in the 11th battalion, one of the first groups of soldiers to hit the beaches in the first wave,” says local historian Valerie Everett, a member of the Friends of Anzac Cottage.

Twelve months later Porter was back in Perth, living in the cottage.

Marjorie Williams, Porter’s daughter, was born in the cottage 93 years ago and is still going strong.

Her own daughter Anne Chapple, a Friends member, helped organise the sunset service.

The cottage was handed over to the Vietnam veterans in the early 1990s and through voluntary work and fundraising they have painstakingly restored it to its former glory.

Richard Williams, WA president of the Vietnam Veterans Association, served in Vietnam from 1970-1, when he was 21.

He says the friendships and bonds formed in the paddy fields and steaming jungles were unique.

“It’s strange, but even if you didn’t know someone personally from back then, you still have this amazing bond because you both went through the same common experiences,” says the 64-year-old. “I was a mechanical fitter and helped clear minefields in Vietnam.

“Before going out we spent three months training in the Queensland jungle.”

Williams estimates there are around 3250 Vietnam veterans in WA and around 200 VVA members. Around 500 Australian servicemen—50 of whom from WA—died in the 1962-75 conflict.

The cottage will be open from 3–6pm on April 25. Prior to the 5.15pm service there will be talks about the history of the cottage, a wreath-making workshop and afternoon tea.