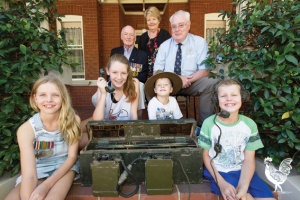 • Jan Wilkie, Cr Rod Willox and Graham McEwan from the WA Army Museum watch as Ms Wilkie’s grandchildren Jayde, Jake, Grace and Tyson muck around with the rare military radio before it heads off to the museum. Photo by Matthew Dwyer

A MILITARY radio found on a verge by a Mt Lawley schoolboy in 1981 is being donated to the WA army museum, after years of gathering dust in a garage.

An eight-year-old Cameron Wilkie was cycling home from Mt Lawley primary school when he spotted the military radio, mess pan and green soldier’s jacket lying on the verge in Woodroyd Street.

Cameron quickly nabbed the accoutrements and bombed home on his bike.

His mum Jan remembers her young son bursting through the front door.

“He ran in saying he had found a uniform with bullet holes in it,” she laughs.

“But it was actually just eaten by moths.

“If was quite funny, he used to wear the jacket when he was playing outside with his friends.”

Jan thinks the military items were put on the verge by Adele Davidson, during a clean-out after her war-veteran husband died.

The jacket ended up becoming a blanket for the Wilkies’ dog, but they kept the radio and Cameron took it with him to his house in Wembley when he grew up and moved out.

Retired colonel Rod Willox, a veteran Stirling city councillor, says the hi-frequency radio is a WSA510, designed and built in Australia and put into service in 1956.

The radio was deliberately designed to look like basic pouches—transmitter in one and receiver in the other—so the operator would not stand out as the signaller and be a target for snipers.

Its horizontal wire antenna could be slung between tree tops and had a range of up to 3000km.

Cr Willox says he used the model when seconded to then-New Guinea with the Australian infantry core in the 1960s.

“The radio bounced its signal off the ionosphere, which meant you didn’t need a clear line of sight to communicate,” he recalls.

“I remember using them in the jungles in New Guinea to communicate with the SAS on an oval in Swanbourne.

“That doesn’t seem very impressive nowadays with mobile phones, but back then it was pretty amazing.”

Cr Willox added the innovative Australian-designed radio was a great success and was purchased by British and New Zealand forces.

Cameron, now 41 with two sons and two daughters, says he wants other people to enjoy the radio.

“I saw the look on my boys’ faces when I showed them the radio and wanted more people to experience that feeling,” he says.

“It will be well looked after in the museum and enjoyed by lots of different people.”