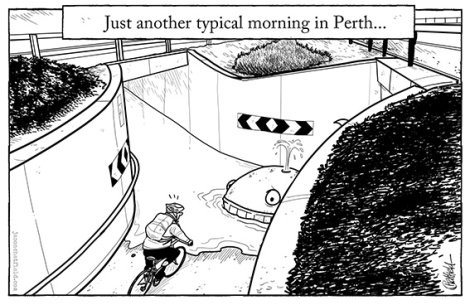 Enough is enough
LAST Tuesday Vincent council passed one of WA’s most ambitious bike plans, and gave approval to the final piece; the Oxford Street corridor.
We are making an unprecedented level of investment for our council and one of the highest rates per resident in Australia. It is a major and significant step forward for our city, which will make our streets safer for cyclists and pedestrians, reduce traffic congestion and encourage healthy living.
No car-parking bays will be lost in the Leederville town centre area from the bike plan, as the bike lanes stop just north of Vincent Street.
The unpleasant incident which took place at our council meeting last week was genuinely upsetting.  The minutes (word for word) clearly show my repeated requests for a respectful debate and for orderly conduct, before having to close the meeting when those requests were ignored. This decision was not the result of one interjection from the gallery.
Unfortunately this is not an isolated incident. This behaviour has been escalating. Vincent staff and councillors have been subjected to swearing and personal denigration both in person at council meetings and via email.
Enough is enough.
The council will not tolerate this kind of behaviour in the workplace nor in our meetings. It is not acceptable that Vincent staff or council members are subjected to this type of behaviour in emails, on social media or in the council gallery while performing public service.
As a council, we accept there is a diversity of views but we ask these be debated in a respectful manner towards staff, and in an environment that encourages robust discussion between council and residents.
Finally, I personally—and on behalf of the council—want to thank the large number of ratepayers who contacted the council in support of our bike plan during the past week. We are committed to rolling out the plan as soon as possible.
John Carey
Mayor

Busy Beaufort
THE Voice had an article July 12, 2014 (“No sign of signs”). This is a new financial year and perhaps the council will be able to find the funding not only to address the no signs the main roads is not doing but also lights for pedestrians to cross at Third Avenue to the medical centre on the other side.
I am a disabled person who uses a gopher and Beaufort Street has one crossing with lights between 9th and 10th Avenue at the library.
I live in Third Avenue (railway end) and have asked Michael Sutherland MP about this and was told there is no money.
Am I expected to go down to the only crossing to come back up to Third Avenue (nearly daily) with raffia flying by and get no assistance from anywhere with this pressing and frightening problem that I should not have to endure?
Why are there no more crossings on Beaufort Street for people to feel safe when attempting to cross the busy road?
A lot of money has been spent putting islands along the street taking up quite a lot of space and making the lanes narrower that the residents are not happy with.
People need to be able to cross safely and not find it a terrifying experience. Beaufort Street should not be a run through to get to Perth or other suburbs and not help local residents on safety issues.
In the past there have been quite a few accidents at the corner of North Avenue and Beaufort Street.
The government and councils are very happy packing more and more people into this area without addressing the problems that are here now and the added problems of more density which is getting over the top and will have a huge impact on the residents who have lived here for many years.
Janelle Marshall
Third Ave, Mt Lawley

Wonderillox
CONGRATULATIONS to Emeritus Colonel Rod Willox the Stirling Lawley ward councillor and stalwart for his efforts to keep this year’s local authority rates to one of the lowest in the state. Great achievement in a difficult environment.
George Bouzidis
Third Ave, Mount Lawley

Trees for air
I HEAR the experts are concerned in the suburbs of Perth.
Stating this situation relates to increased temperature and even crime. In the meantime we have a state government pushing for infill with no policy on retaining existing tress or requiring developers to pant trees or contribute to local government tree planting programs. Example—within Anderson Street and adjacent areas near-on 100 mature trees have been removed due to greed by all concerned. We seem to forget human life depends on trees for our oxygen.
Robert Hart
Anderson St, Mt Hawthorn

Looking for George
I AM doing research on Australians awarded the Edward Medal, for which I need info on George Beaman GC.
Beaman won the Edward Medal for his bravery as a member of the rescue party after two explosions at South Kirby Colliery, Yorkshire in England on August 22 1935. He came to Australia in 1948 and was living in Perth, when he exchanged his Edward Medal for the George Cross in 1972.
Anyone with information please write to me at 30 Baldwin Ave, Boronia 3155, Victoria or email vhstreet21@yahoo.com.au
Paul Street
Boronia, Vic