THE Kurb Gallery in Northbridge will close by Christmas unless the owners can find a cheaper home.

The gallery has been paying a subsidised rent of $22,000 a year to the Metropolitan Redevelopment Authority for its William Street digs but new landlords have taken over the building and want to nearly triple the rent to $60,000.

“We looked at moving into the old Chrissie Parrott Arts studio in Maylands, but the landlord wanted $40,000 in rent and it was too far off the beaten track.” 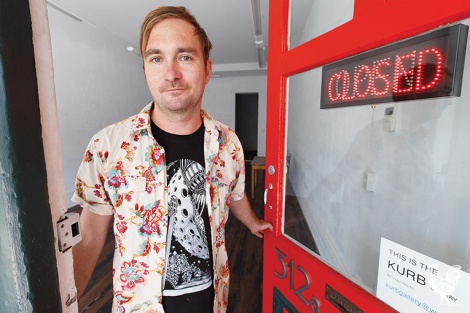 Turner Galleries is also getting ready to shift.

“The sale of Turner Galleries is a strategic move to realise capital gain and relocate elsewhere,” says owner Helen Turner.

“This will probably not happen until the end of 2015. There is a developer interested in the property but as yet there is no contract written or signed.

“I will be looking for an exciting new location for the gallery, in the coming year, pending an agreed sales contract.”

“A few years back they changed the super laws so you couldn’t claim back art if you bought and displayed it, you had to put it in storage,” he says.

“I do well at the art market but the pieces are cheaper and it’s more of a retail environment.”

Mr Spriggs approached the WA government for help with finding a new home for Kurb but never heard back.

He is open to offers and needs around 300sqm of gallery space.

Kurb exhibitions have included works by, amongst others, Matt Doust, Noel Sheridan and Danielle Freakley.

One response to “Rent kicks gallery to the Kurb”