Life is getting worse down at Weld Square say nearby traders and residents.

Simon Psaros opened Brika restaurant on Stirling Street a couple of years back but is a long-time resident of the area. He says it’s as bad now as it’s ever been. Twice on his brief walk to work he’s been punched. Customers in his alfresco section are often intimidated by passers-by. Once, a knifing victim ran into his restaurant to seek shelter.

“We’d have cause every day to call police,” Mr Psaros says. “Staff are not wanting to come to work.”

He’d hoped Brika would raise the tone but concedes it’s been an uphill struggle.

It’s a similar story across the square at the pharmacy and IGA, with owners talking about trouble in the park reaching a new level of late. On Monday, resident Brayden Wardrop invited Vincent mayor John Carey to a meeting with traders, locals and police.

But the meeting saw no easy solutions for troubles at Weld Square: historically it’s a meeting site for Aboriginal people but is also a mecca for homeless, down-and-out swaggies and backpackers who come to the area for free food, handed out daily by Manna Inc. Mr Psaros says “there’s no doubt [the problem] is exaggerated” by Manna’s charity, as numbers swell in the park.

Mr Wardrop wants the council to stick to a plan to move Manna out of the park and into a building.

Mr Carey says the council has searched high and low for a suitable building but it’s been hard going: one potential space proved too small and would’ve meant a line of foodseekers snaking out the door and into the street anyway.

Manna can operate until December but is unlikely to be evicted if it hasn’t found a home by then, unless there’s a massive, unanticipated upheaval at October’s council elections.

Sergeant Wayne Godwin says it’s important police are called for every single incident. But fatigue means traders rarely bother: incidents are so common and quick that they’re over and done by the time police arrive. • See this week’s Chatfield under Letters.

THE surge of homeless and down-and-out folk in Vincent has been blamed on neighbouring Perth city council.

At Monday’s crisis meeting, police senior sergeant Brendan Moore suggested the increase in homelessness at Weld Park was down to “displacement from work done at Wellington Square,” where a small number of well-to-do citizens have been making a fuss about people sleeping in the park.

Vincent mayor John Carey agrees: “Perth has been pushing the problem into Vincent.” He said it wasn’t realistic to just get rid of homelessness, and he wasn’t keen on solutions that just shift the problem to someone else. 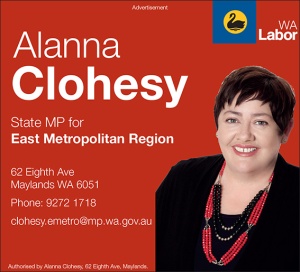 One response to “Wild on Weld”