Following concerns by neighbours from swish apartments that the squatting presented a fire risk, the Voice peeked through a kicked-out front panel to a scene of chaos.

Mattresses, bedding, food scraps, luggage, bikes, clothing and even a stereo system were littered around the heavily-graffitied and damaged building.

There was nobody inside, but a heavily intoxicated man wandering nearby indicated he’d been camping there with a “big mob”.

• Every year or so homeless people clamber into this run-down food hall. Photos by Steve Grant

What our photographer didn’t realise until processing his images later was that while shooting into the gloom he’d captured glowing embers in a pile of kindling set up on the counter of a long-forgotten takeaway joint.

There was also the remains of a fire on the tiled floor.

For more than 15 years the food hall has been an eyesore, and periodically panels on the front of the building are kicked down by homeless people.

Kath Turner lives next door and says their arrival seemed to coincide with Perth city council booting a large group of homeless people off Heirsson Island.

• Our photographer was suprised to discover he’d captured burning embers in an unattended fire.

She says rellies staying with her also copped an earful of abuse from some of the squatters.

Perth police media spokesman Samuel Dinnison says they’re aware of the complaints and “in the last 10 days we have attended the location three times, and on one of those occasions issued a move on notice to a male person”.

He says “in general, our response to such complaints may be resolved either through Move On Notices or criminal charges” but that won’t solve things long term.

“While each individual situation will need building owners and local government involvement, longer term solutions are required and WA police works closely with a number of community service stakeholders to identify and respond to such local issues. Enforcement alone is not an effective strategy, however where it is required WA police will act appropriately in the best interest of the community”.

The Voice understands that local coppers haven’t recognised any of the campers from Heirisson hanging around Parker Street. 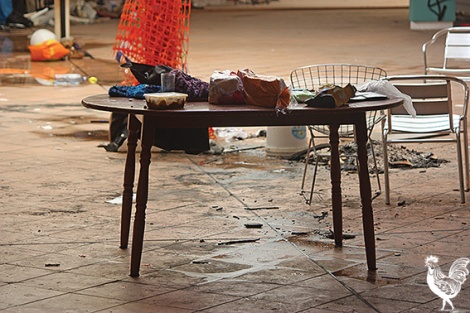 The food hall is one of a half dozen notorious tough nut properties around town that Perth city council’s struggled to get fixed up.

Often the owners are an amorphous conglomerate of shares, trusts and blandly named Pty Ltds, and many are overseas owned, so forcing action can be difficult.

Back in 2010 the council said the owners gave “a commitment to take steps to improve” the place but it still looks like hot garbage.

In 2014 town planners Rowe Group suggested the city allow it to be used as a condo or hotel to encourage development but still nothing’s happened.

We asked Perth city council media man Michael Holland if there’d been any update but they don’t talk to us anymore.