THE scuffing feet of thousands of Pokemon Go players is causing havoc at Kings Park.

While the ridiculously popular app has been a boon to businesses and helped dragged gen-yers off the couch and into daylight, newly planted garden beds and grass where Pokemon characters “gather” are being trampled to death.

Thousands are flocking to Kings Park day and night, causing authorities to rope of large sections of grass and issue a plea for players to take their rubbish with them.

While virtual monsters don’t care about litter, the park’s home to 100 native animal species in the park from birds to spiders that don’t appreciate cans of energy drink and Cheetos packets being tossed into their home.

• It’s Tuesday morning on a school and work day, yet Kings Park was packed with players hunting for rare Pokemon characters. Photos by Steve Grant

The park authority’s also banned cars stopping along Fraser Avenue because of the jams caused by players desperate to snag an adorable Dratini. The Chook’s photographer said there was also a fug of cigarette smoke in popular Poke stops to counter any benefits of being outdoors.

Describing the players’ behaviour as “unusual”, the authority says mass displays of pink everlastings, which have only recently germinated and are a big drawcard for the wildflower season, have been affected.

About 1000sqm of turf has been damaged and roped off, with the worst affected areas needing to be replaced and the rest given a top-dressing of sand.

The grass is expected to recover by October, however the garden beds may take up to a year.

The KPBA has asked Pokemon players to stick to footpaths, keep out of the garden beds, watch out while crossing roads and not to disturb others trying to pay their respects at the park’s memorials.

Even the federal government’s issued a safety edict: The Stay Smart Online initiative has sent out a “moderate” priority alert noting that Pokemon Go players have been involved in near misses between pedestrians and cars, people are playing while driving, while crowds of players in Sydney were waterbombed by angsty residents tired of the noise. 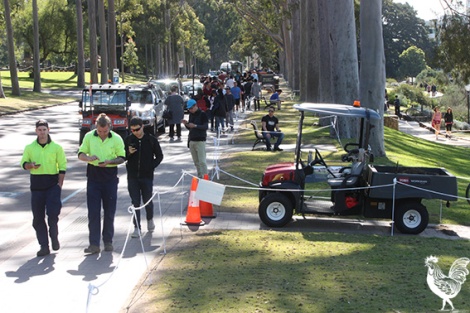 Players have responded to the anti-grognards by circulating memes pointing out that for years people have been telling nerds to go outside, and now they finally have gone outside everyone’s telling them “yes, but not like that!”

It sounds like some of the Kings Park staff have had their fill: Lisa Sheppard left a one star review on the Kings Park Facebook page stating: “The grumpy old man from the information centre needs to check his temper. We understand the sudden influx of people at the moment probably brings with it a certain amount of trouble makers, but to bellow angrily at a couple of six year olds for stepping in the wrong spot is unacceptable. Take your anger out on someone your own size or at least someone who’s doing something wrong intentionally. We left the park with the kindest, soft-hearted little boy in tears. You sir, are a horrible person!”

Park authorities are looking into the brisk ticking off.