WHEN Pavilion Books was looking to extend its worldwide line with a tome about Perth, the history publisher went straight to local historian Richard Offen.

The head of Heritage Perth received the email out of the blue just before last Christmas last year asking for a “then and now” series on Perth, comparing historical photographs with today’s surrounds.

Many of the photos he’d already seen in the state library’s collection, but the detail at full resolution was an eye-opener.

“My editor said to me with both the then-and-now shots, ‘don’t finish the captions until you’ve looked closely at the high resolution versions, because you’ll be surprised at what you see’,” Mr Offen told the Voice.

With the images blown up large he could pick out old advertisements on billboards, a blotch on a CBD street turned out to be a working dog (no one had handbag dogs back then), and it became clear how One Tree Point near the Narrows Bridge earned its name. 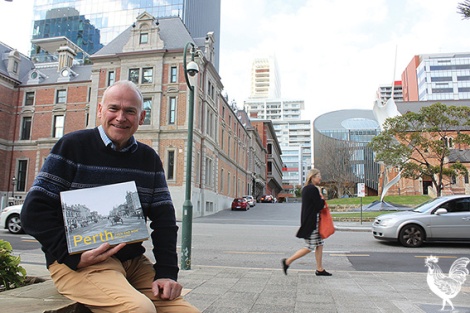 • Richard Offen on St Georges Terrace, where a lot has changed since Alfred Stone captured the area in the 1860s.

While some groan that most of Perth’s fine historical buildings have long since been knocked down, Mr Offen says the side-by-side comparisons show there’s still a lot there.

“There’s lots left. When you look at the picture of Barrack Street, you look up the street and you realise a vast majority of those buildings are still there.

“A lot of what’s on [St Georges] Terrace has gone, but there are still odd pockets of heritage like the Palace Hotel, the Cloisters building, the Old Perth Boys School and Newspaper House.”

Like his ridiculously popular history walks (that always book out) and his well-populated Heritage Days, the book’s been more proof of how interested people are with our past.

“Preorders outstripped supply,” he says. It’s already gone to a reprint, a record for Pavilion’s line of books.

Perth: Then and Now is available online at Amazon, at the Heritage Perth website, and a few bookshelves.