PERTH council staff have been ordered to “dress suitably and modestly” with bans on revealing “too much cleavage, back, chest, legs, stomach or undergarments”.

The Voice has been forwarded a staff newsletter from a bemused insider showing the ban extends to midriff tops, hoodies, t-shirts and spaghetti strap and strapless dresses.

In a fairly Soviet measure “denim jeans” are also forbidden, along with casual shorts, sweat pants or “excessively tight pants”. 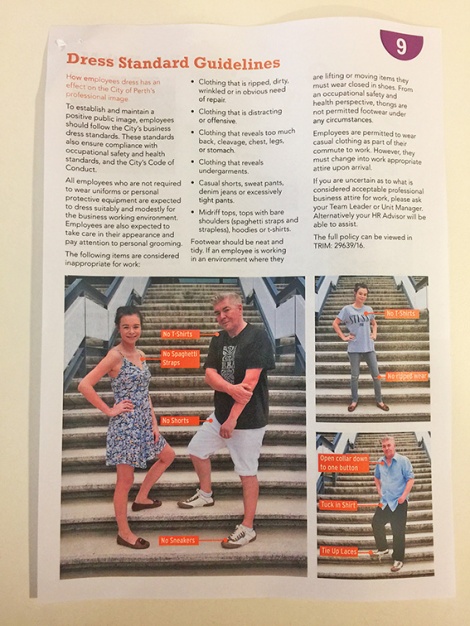 The newsletter shows a couple of volunteer staffers depicted in forbidden outfits. Even a fairly demure summer dress was considered “inappropriate”.

The policy aims “to establish and maintain a positive public image”.

Perth council sponsors several fashion events including the huge Perth Fashion Festival, though  few of this year’s outfits would make it past the censors at council HQ.

Our insider tells us a lot of staff are “quite fashion forward” and many, especially women, will be affected by the rules as thin-strapped dresses are in at the moment and fashionably meshy tops make bra lines visible.

Despite the approach of high summer all staff will have to wear suit jackets for council and committee meetings; but unlike councillors they’ll have to fork out for the threads from their own pockets.

Staff are also advised to “take pride in their appearance and pay attention to personal grooming and hygiene which should be of a high standard at all times”.