ROSEWOOD Care Group will triple the number of beds at it’s Cleaver Street aged care complex in West Perth under a $65-million redevelopment.

The six-storey redevelopment will bring the number of beds at the old folks’ home to more than 150, and also see a $500,000 restoration of the heritage-listed Florence Hummerston Lodge.

Rosewood says its 1957 buildings have come to the end of their life, but locals aren’t happy with its scale.

About 40 met with Perth MP Eleni Evangel across the street from Rosewood last Saturday, expressing concerns about the height, bulk, and extra traffic the bigger home and its attached pharmacy and 40-seat cafe would generate in the mainly residential district. 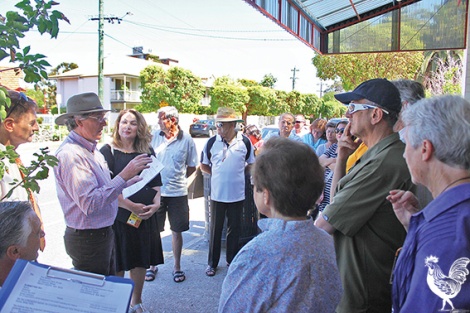 • Locals gather to discuss Rosewood’s expansion and (right) the design for the facility’s six-storey expansion.

A petition is also doing the rounds saying it will reduce the amenity and privacy of homes to the south and east, and cause excessive overshadowing”.

Ms Evangel called for Vincent council to release the minutes of two Design Advisory Committee meetings where experts pored over the plans, saying it could reveal if the plans got extra height for design excellence. She says that information could help locals in their submissions.

The minutes are usually available online, but they were deemed confidential. At last week’s council meeting Cleaver Precinct Group member Marie Slyth asked why they were being kept under wraps and implored the council to release them, but didn’t receive a response. The Voice has since heard from CEO Len Kosova it was a staff error and they’re now posted.

Rosewood CEO Mario Zulberti says the non-profit organisation is “aware of some concerns about the proposal from a small group of residents and we are committed to working towards an outcome that will benefit the community.

“Aged care is a significant issue in our community and Rosewood’s development proposal seeks to address some of the shortfalls in the chronic shortage of aged care beds in WA. Senior citizens … do not deserve to be shipped off to a back lot on the outskirts of Perth to live in isolation.

“It is no secret that WA is an estimated 3000 aged care beds short.”