LABOR’S candidate for the state Perth seat John Carey launched his campaign Saturday January 21, with about 270 people packing out Perth town hall to wish him well.

During his speech Mr Carey recalled his father’s advice: ‘In politics, one day you’re a rooster, the next day you’re a feather duster’.”

He said its message was to avoid becoming arrogant or feeling entitled: “In today’s climate this saying is more important than ever, and I think my dad should have whispered into Colin Barnett’s ear.” 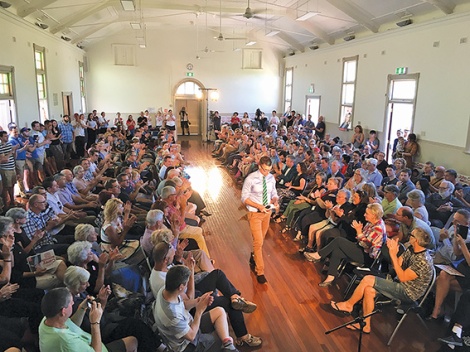 • About 270 people turned up to see John Carey launch his campaign for the state seat of Perth.

During his speech he criticised the government’s management of the new children’s hospital and overcrowded high schools, while calling for more work on diversifying the economy.

Come the March 11 election he’ll be facing incumbent Liberal MP Eleni Evangel, a former Perth city councillor who won the seat with a big 12 per cent swing in the primary vote against Labor in 2013.

Ms Evangel is urging voters to stick with a Liberal government and continue their efforts to strengthen tourism with big projects like Elizabeth Quay and the Perth Stadium.

Ms Evangel has recently taken aim at the “misrepresentation” in Labor’s campaign against the privatisation of Western Power saying the Opposition’s scare-mongering.