THE future of Maylands Waterland is hanging in the balance, with Bayswater councillors rejecting a $5.8 million rescue plan put forward by the community.

The quaint water park on Clarkson Road is popular with parents of young children (when its sunny), but is in urgent need of essential maintenance and renovation, so Bayswater council undertook one of the longest and most thorough community consultations in its history.

It spent $50,000 holding workshops with interested locals to figure out the best way forward.

But their ideas were deemed too expensive, coming in at almost double the $3m the council wanted to spend. 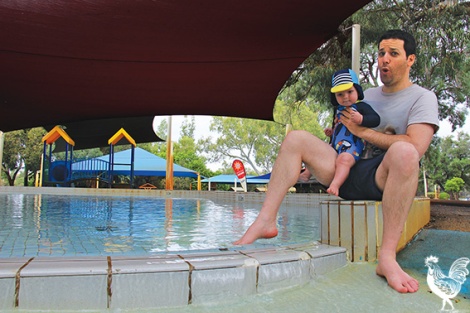 • The unheated pool at Maylands Waterland is a bit chilly for Elli Petersen-Pik and his youngun. Photo by Steve Grant

At January’s meeting, the majority of councillors decided against increasing the budget cap.

Only councillors John Rifici, Michelle Sutherland and Catherine Ehrhardt were happy to stump up $6m and analyse the merits of the community plan, but they were outvoted.

Councillors Stephanie Coates and Dan Bull said they didn’t mind looking at the community plans alongside two other cheaper options that staff would develop, but again didn’t have the numbers.

Elli Petersen-Pik, from the Maylands Ratepayers and Residents Association, is keen to see the park renovated, particularly as he has a young bub who likes a splash around.

Mr Petersen-Pik believes the $5.8m figure was actually bigger than what the community was asking for: they would’ve been happy with a shipping container cafe (used to good effect in the Perth cultural centre) or a venue developed as a public-private enterprise.

He says that would bring it down from the $1.3m staff estimated for a new cafe.

The community was also happy for space to be allocated for a deep pool (estimated to cost $800,000 to $120,000), but not go ahead until funding was available from other tiers of government.

Mr Petersen-Pik says the deep pool could have been used for income-generating swimming lessons.

He says the aim of the community plan “was to create a facility to serve the city’s growing population for the next several decades.

“Participants were aware of the significant cost of the proposed changes, so there was consensus that construction could be implemented in stages.”

Mr Petersen-Pik says the pools are freezing when it’s not a scorching summer’s day and warming them would make them more attractive for more of the year, while there could be opportunities to target seniors or other groups to use the venue.

“It was a very disappointing decision, sidelining the thorough council-approved community consultation process which cost $50,000 and wasting the time of its participants, who had taken part in good faith,” Mr Petersen-Pik said.

It’s now back to the drawing board with councillors asking city staff to come up with two further options that are under $3 million.