HIGHGATE photographer Jacqueline Jane van Grootel has photographed 18 same-sex couples to tell their stories in the lead up to the marriage equality postal survey.

Along with images of the couples, she’s compiled accounts of their lives together and what marriage equality would mean for them in her exhibition From this day forward.

• Elliot and Dan are one of same-sex couples Highgate’s Jane van Grootel photographed for her exhibition From This Day Forward. She also compiled accounts of their lives together and what marriage equality means for them, prompted by the Turnbull government’s national survey on the right of gay couples to marry. Photo montage by Steve Grant

“The postal survey or plebiscite was bothering me a little bit; that people’s rights were going to be ‘voted on,’ or surveyed on,” Ms Grootel says.

“The [project] is basically taking a moment to let the people being debated upon to speak for themselves rather than being spoken for, as often happens in this divisive debate.”

She put a call out on Facebook and had a broad range of couples come forward, from Terry and Damian who met at work 37 years ago, to younger couple Sharna and Cinnamon who had a very Perth meeting: “We met through a mutual friend at the Flying Scotsman pub, although Sharna can’t remember that,” Cinnamon said in her account.

Former Greens MP Lynn MacLaren is one of the subjects, photographed with her partner Sarah.

“I resent the whole postal survey—it’s fundamentally flawed,” she says.

“It’s unnecessary and actually offensive to have a non-binding vote on people’s rights.”

“It makes me angry, with a partner with a terminal illness, that we are not automatically afforded the same rights and protections even though we are legally married (USA 2016) as a heterosexual married couple.”

Wilora and Elle are another same-sex couple whose dream is to get married.

“I grew up knowing that if I met my soul mate, I would get married,” Elle says.

“I didn’t realise it would be a woman.

“And I don’t think it should be any different—love is love.” 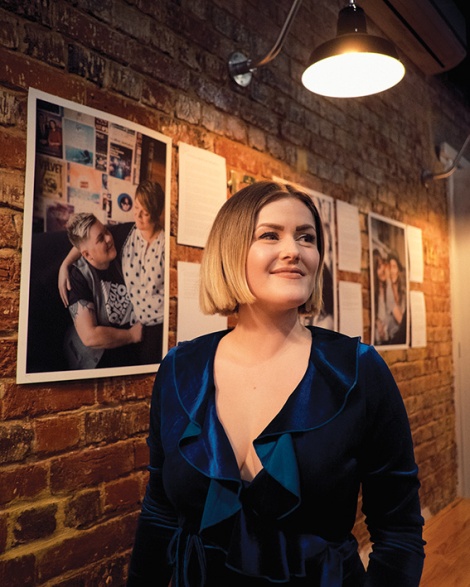 • Photographer Jacqueline Jane van Grootel with her image of Sharna and Cinammon. Photo by Mike Dann

From this day forward was recently exhibited at the Old Faithful Bar & BBQ in the city, as part of a fund-raiser for the recently defunded LGBTI service, Living Proud.

The photographs are now online at http://www.fromthisdayforward.info/love