THE state government has ordered two concrete batching plants in Claisebrook to close by 2024, following years of complaints from locals over noise, dust and traffic.

Many residents say the dust, noise, traffic, and amount of space the plants take up mean the area, close to a train station and bike network, is under-utilised.

“This is a big win!” said business group Claisebrook Collective and locals in a statement this week.

“It shows [the state government] has caught our vision for this precinct, recognising the unrealised potential of these prime inner city sites to deliver housing diversity, jobs and more.

“While the batching plants have been allowed to stay for another six or so years while they plan for relocation, there is now no doubts about the long-term direction of this precinct as a vibrant, lived in, higher-density, inner-city community where many more people will be able to live, work, eat, shop, exercise, study, gather and play.”

But Greens north metro MLC Alison Xamon says the state government has been “overly generous” in allowing the plants to stay until 2024.

“The Claisebrook precinct has been held back too long by the presence of these batching plants,” she says.

“They were only ever intended to be on those sites temporarily. They should have moved in 2012 or in 2017, when their previous special licences expired.”

The plants’ licences were due to expire in 2011, but former planning minister John Day granted them a five-year extension. 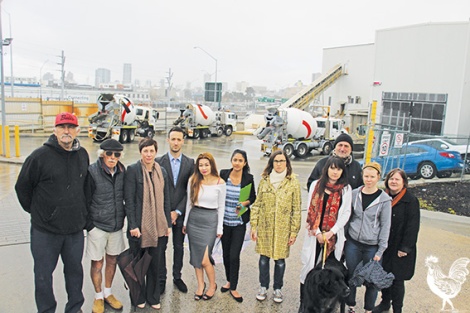 That expired last year, and Vincent council gave them one more year while they tried to push through a new planning scheme that would effectively zone the plants out of town

On Thursday acting planning minister Ben Wyatt approved a slightly modified scheme, with a 2024 deadline, and upzoning of the land to residential density R160, making it far more attractive to developers to build apartments.

“This decision concludes a long period of uncertainty for all stakeholders and provides an outcome that meets the needs of both the community and industry,” Mr Wyatt said.

“There will continue to be adequate concrete supply for future construction projects in the Perth central area.”

“Although we wanted a much shorter timeframe than 6.5 years on the operation of the concrete batching plants, we recognise a clear end is in sight,” she says.

“Claisebrook landowners are ready to develop, new cafes and businesses are regularly emerging, and the community is united in their desire to see an end to the dust and disruption of the plants.”

Perth Labor MP John Carey welcomed: the decision. “I would have liked to see them gone sooner, [but] what it does show is there’s a clear vision in the new plannig scheme that says this is to be a high density residential and mixed use area.”

However, both Claisebrook-based concrete plants say forcing them out of the suburb will push up construction costs in the city,.

“The importance of the East Perth plant to the continuing growth of our city, and indeed, the growth of the state, cannot be underestimated,” read a statement from Hanson.

The modified planning scheme goes back to Vincent council for a final look before it’s set in stone.