THE finest artworks of the Renaissance meets the best of internet meme culture in WTF Renaissance.

Part of the upcoming Perth Fringe Festival, the exhibition takes the most stately, dignified, finest works of the renaissance and warps them with 21st century captions, with an ethos of “old paintings, new captions, total nonsense”.

The project was started by comedy producer Angela Mary Claire Thompson in August 2014 “while a lot of my friends, who are mostly comedians, were all at Edinburgh Fringe and I was at home in Melbourne”.

She started adding captions to Renaissance paintings, “basically entertaining myself, and then accidentally started entertaining other people so decided to keep at it”.

For a while WTF Renaissance was only viewable online, but it has since been exhibited twice in Perth, and also at the Adelaide and Melbourne Fringe festivals.

Thompson says the best way to describe it is to “imagine going to the Louvre with your most sarcastic friend or relative. The one who has to make up a little back story for the paintings. WTF Renaissance is real Renaissance paintings with fictional captions, mostly set in the modern era. It’s like watching a classic film with captions from The Simpsons, or Samantha Bee.” 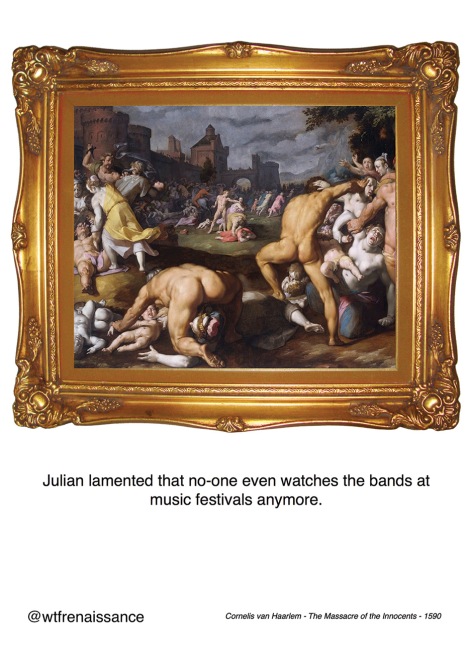 The humour’s not for everyone, but Thompson says “my theory is even if people don’t get it, the paintings are stunning, so all is not lost. Most people get some of it.

“It is interesting when I’m walking around the exhibition, as hardly anyone ever knows it’s mine, so I get to hear what people really think.

“Sometimes people don’t get it so badly that they get angry about it, which I find quite interesting. Mostly the reaction is very good. I’ve taken photos for people in front of the exhibitions before, with them having no idea I wrote it.

“I haven’t had anyone get offended at an exhibition, but sometimes people will get very upset online when I use religious paintings which is pretty common given it’s Renaissance art. Sometimes on Twitter they’ll get quite abusive which is quite funny really.”

The project has gotten huge exposure. New York Times columnist Bret Stephens said “where would our literary culture be without @WtfRenaissance?”

The first Perth exhibition was 28 pieces and this one’ll be far bigger, and it runs as part of the 30 shows being hosted by The Lucky Cat at the Perth Town Hall from January 27 to February 25.