THE big blue head sculpture in Vincent has shed his winter gear, but the hat and scarf have been remade into blankets for the kitties at Cat Haven.

North Perth Knit, Natter, Crochet and Craft spent thousands of hours making the giant clothes for the Ken Sealey sculpture, formally known as “Beseech”, and dressed him up in June last year.

Head knitter Dianne Birt says they didn’t want any of the material to go to waste, so they’ve recycled and repurposed the winter clothes into blankets for Cat Haven.

The clothes were stained with bore water, but after a clean, they were good as new. 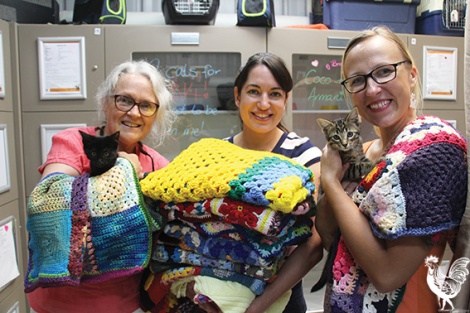 Ms Birt says “the blankets have proved to be cat magnets, as all group members with cats who worked on making the blankets said they could not keep their cats off the works in progress”.

The knitting group donated the blankets on Tuesday and Ms Birt says “both the staff and the cats were delighted to receive them.

“The Cat Haven is such a worthy cause and we were very pleased to be able to help out to a small extent with all the wonderful work they do”.

Cat Haven has hundreds of cats, from playful kittens to sedate old-timers, and they’re always looking for people to give them a loving home. 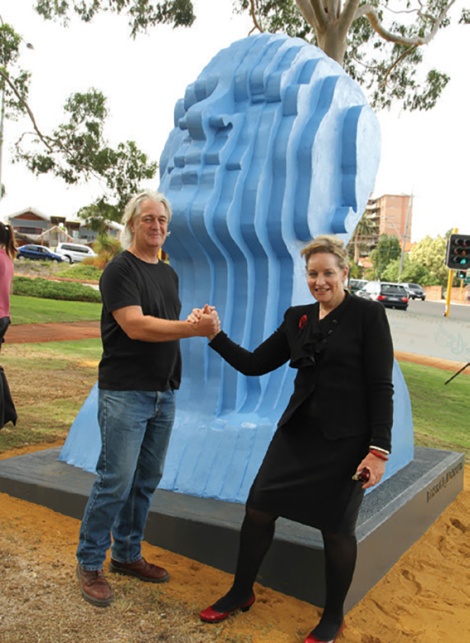 They’ve got a gallery of kitters at http://www.cathaven.com.au/adopt/, or pop down to 23 Lemnos Street in Shenton Park for a look.

North Perth Knit and Natter group have also made soft octopuses to donate to Fiona Stanley and St John of God Hospital to comfort premature babies, and they’re knitting poppies for the centenary of the end of World War I.

The knitting group meets every second Friday afternoon at the Vincent library in Leederville, and their next catchup will be a poppy crafting workshop on February 16.