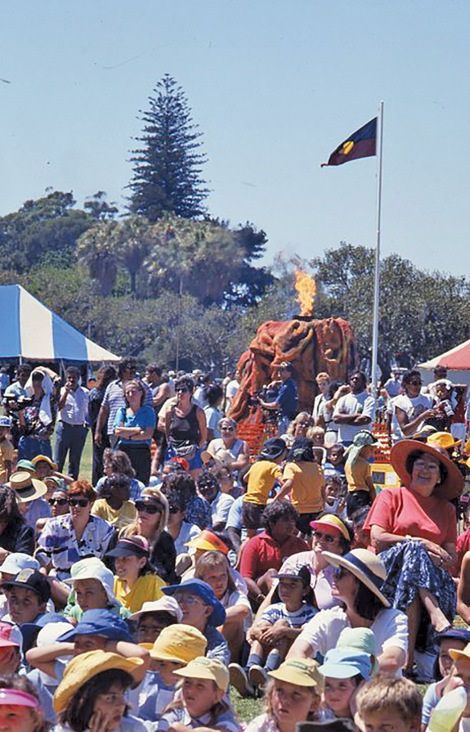 “NOONGAR people still talk about it like it was yesterday.”

It’s been 25 years since the last Kyana corroboree on the Perth Esplanade, but festival coordinator Robert Eggington says the legacy lives on strong among his people.

“Not a week goes by people don’t ask, ‘Robert, will there be a third Kyana?’

“When my son was still alive – he passed at 27 – he was asked by many people: Robert, are you going to do what your dad did?”

In 1991 and 1993 Aboriginal artists, singers, dancers and storytellers gathered at the Esplanade for the corroborees.

Elder Dean Collard said at the time, “the city skyline seemed to evaporate…and we were back on country”.

Kyana was a celebration of culture and art, but it was also a deeply political movement.

The first Kyana in February 1991 took place while the Royal Commission into Aboriginal Deaths in Custody was coming to an end. A fire burned in the centre of the ceremonial grounds in memory of those who’d died in custody.

The second Kyana kept up the theme of the struggle for survival, and was a tribute to the Noongar resistance leader Yagan.

One of Archie Roach’s first public performances of Took the Children Away was on stage at Kyana.

The event faced opposition: A procession of suited officials showed up to complain about the traffic management and sound levels, and it was a target for anti-Aboriginal sentiment. People shouted racial abuse and hurled objects from passing cars.

In those days, “sticking an Aboriginal flag in the ground caused a hysteria,” Mr Eggington says, and they put up hundreds of them.

They returned to the ceremonial grounds one night to find their largest flag had been damaged.

As they got closer they saw someone had set fire to stacked newspapers underneath it in an attempt to burn the flag.

“We did it at a time when it was really difficult in terms of the open racism that was in Perth.”

On the last night of the first corroboree, Mr Eggington reflected on the memorial fire in the centre of the esplanade and closed Kyana with the words “may our campfires burn forever”.

But the land Kyana took place on no longer exists, having been turned into Elizabeth Quay.

Mr Eggington, executive officer of the Dumbartung Aboriginal Corporation, said seeing that space converted into the quay was “sad – it absolutely tore our hearts apart”.