WHEN Matt Penny’s not pulling rabbits out of hats he’s pulling pints at the Blue Room Theatre.

Magic and bartending go well together: he can practice sleight of hand for patrons and on quiet nights he can ponder monologues for his shows like Find the Lady.

Penny honed his sleight of hand when he was around 20: “I started working as a waiter in London…I realised that if I was doing magic tricks at the table, then the tips would be a lot better!”

But he didn’t originally get into magic for money.

“I started doing magic tricks to get some love and attention,” he says. “My mum died when I was very young, 45 years ago.”

His father remarried shortly after, and growing up in a family with a stepmum and two older brothers he felt something missing. 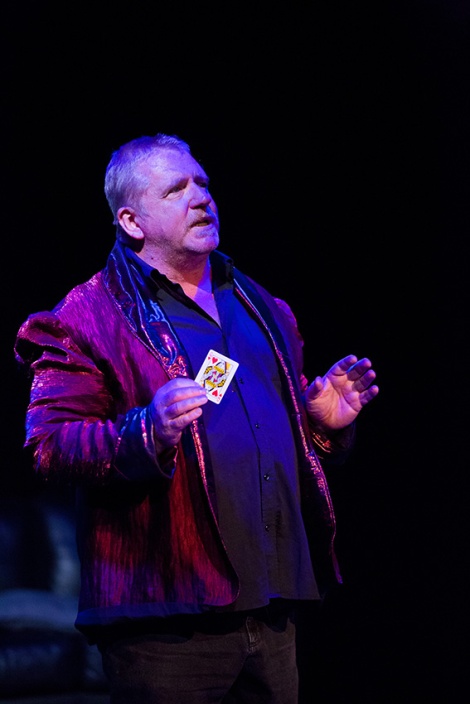 • Penny in his one-man show Find the Lady

“I found myself doing things like learning the piano or putting on magic shows because I missed the connection with my mother, and I was wanting some love and acceptance in a different way.”

Penny was born in 1968 in the UK, and grew up watching Tommy Cooper do his comedy magic act on TV (Cooper’s act was based on him being a hopeless magician and when he died mid-performance on live TV in 1984, the audience thought it was part of his comedy shtick. It was a heart attack).

To actually be a magician was “very different back in the day”.

“When I was maybe 20 years old, I wanted to learn some new tricks and there was no internet then – I went to Davenports.”

Davenports is the historic magic hub of London. The shop was founded in 1898 by Lewis Davenport, whose rags-to-riches tale saw him go from apprentice cooper to one of the age’s most famous conjurers. He’d ended up selling magic tricks to Houdini and Tommy Cooper.

Davenports’ family still own the store to this day.

If you weren’t buying a kit from Davenports’ descendants “the other way you’d learn tricks was almost like a barter system”.

Penny says magicians would meet up and trade tricks.

The internet’s revealed the secrets of some famous illusions, but Penny says to perfect one you still need “to have some personal interaction with someone else who knows how to do the trick”.

And just performing an illusion doesn’t make a show: It’s the story, the jokes, the stage patter or combining several tricks into a grand illusion that Penny says is “the real skill”.