UPDATE: The City of Perth commissioners have approved the ATP Cup’s grant at the July 30 council meeting.

THE City of Perth is considering a $120,000 sponsorship of the men-only tennis tournament slated to replace the Hopman Cup in WA.

The mixed-gender Hopman Cup was held for the last time in Perth in January this year, with the doubles match pitting Serena Williams against Roger Federer.

It attracted 14,064 fans to Perth Arena, the highest attendance for a single game in the tournament’s history. 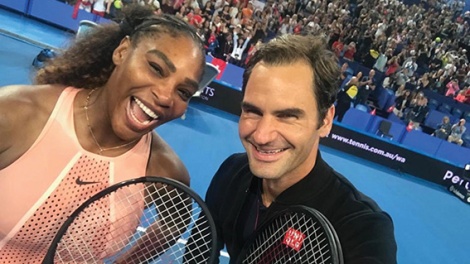 • How about instead of “Tennis” it’s “Mennis,” and it’s just for the fellas: The Serena/Federer selfie from the 2019 Hopman Cup was iconic, but it’ll just be dudes at the replacement event.

The City of Perth’s event sponsorship panel noted “the loss of a women’s element to the tournament was regrettable”, but still recommended commissioners give $120,000 in cash and $10,000 worth of banner advertising to promote the event.

They’ll vote on the funding at the next council meeting on July 30.

The WA government is the major sponsor but Tennis Australia is hoping for council funding too.

Tennis Australia believes the six-day men’s only event (January 3-8) will attract even bigger crowds than the 110,000 people who came to the city for the eight-day Hopman Cup, and could have more than triple the number of TV viewers.

It’s a tri-city event with matches also being held in Sydney and Brisbane.

At January’s Hopman Cup, Serena Williams said “obviously it would be heartbreaking” if the unique, mixed-gender event was cancelled.

In March the WA government said “Tennis Australia is also exploring the potential for a high-quality professional international women’s tennis event to join the program in Perth in the future”.

There’s been no announcements yet, but Perth will get a one-off women’s event in November when the Fed Cup is held in Perth for the first time since 1971.

Mixed doubles have a long tradition in tennis, but occasionally men have played women in singles.

In 1973 Margaret Court took on retired champion Bobby Riggs, who’d bragged that aged 55 he could still beat any top female player in their prime.

After winning that match, he played 29-year-old Billie Jean King in a match dubbed the “Battle of the Sexes”.

Riggs lost the match in straight sets and according to his son suffered six months of depression as a result, though he bounced back and became close friends with King.