THE benefits of a community garden are endless, and to list them all would take more space than we have. That being said, some key bonuses are:

1. A sense of community
Community gardens are a great way to make friends and to meet people with similar interests, as they tend to attract people who are willing to take time out of their days for a higher ideal. The sharing of resources and knowledge is a key aspect of a communal garden, and invariably surplus produce will be shared amongst the participants, fostering strong social bonds. It brings together people of different ages, backgrounds and incomes, and unites them in getting their hands dirty for a good cause.

2. Food security
With food scarcity growing by the day, securing a food supply can logically be a high priority for many people. While a serious food shortage would likely see community gardens easily raided by hungry opportunists, growing your own food in the meantime not only means less money spent at the supermarket, but developing the skills required to grow food in the family home. The spread of African Swine Fever has now reached East Timor, and is so serious that China has already exterminated between 40 to 70 per cent of its pigs, which a recent ABC report equating it to a loss of around 20 per cent of global meat protein. This is unprecedented in world history, and is already causing significant price rises in alternative proteins from salmon to chicken.

3. Health
The health benefits of community gardening are numerous, from the sunshine’s Vitamin D to the vitamins in the fresh produce you can grow. It is far easier to grow pesticide and chemical free food in a small controlled plot than on a large commercial farm, and so you can ensure you know exactly what you are eating. Aside from the physical benefits, it has been shown in numerous studies that gardening benefits mental health, and in a community setting prevents social isolation, particularly among retirees.

4. The Environment
Growing food in a sustainable manner is not only good for the planet, but can regenerate the area itself. The effort made in improving soils and removing toxins naturally improves the local ecosystem, and the encouragement of bees benefits the surrounding area as well. Children who participate will likely be more mindful of the environment as well as the energy required by food production, meaning less food wastage and hopefully future environmentalists.

Of course, no community garden will run completely smoothly. One of the key problems that plot-plodders face is the pinching of their hard earned produce, and this is incredibly hard to police. Nobody wants an environment of suspicion or a CCTV camera hiding under each cabbage, but in general it’s the wider public that might treat a garden as a free-for-all. Controlling access is therefore important, and many gardens have put up fences around the perimeter, granting anyone with a plot access while protecting the garden from vandalism (yes, it happens) or outright theft.

One of the other thorny issues that local community gardens face revolves around governance. Each community garden, at least in WA, will have a different method of administration. Some will have a rudimentary committee formed from the plot holders, while others will elect a management team. Controlling both access and rental fees can be contentious, with rumours abounding of favouritism and political-style machinations as management seeks to determine who grows what, or who is allowed a space.

The other major issue is much harder to resolve, and that is the problem of combining different aims, abilities and ambition in a small space. If a gardener’s plot is attracting nuisance pests, or is cross-pollinating everyone else’s crops, it can be hard to resolve fairly. A neglected plot can infect a whole garden with fruit fly, leading to questions about whether it is appropriate to remove a person’s crops without their permission in order to protect other areas.

It seems that the most successful community gardens are those with a more liberal ethos, providing essential services like security and watering whilst remaining hands-off or at least consultative with the plot owners. A healthy online social media component can be democratic and allow for many issues to be resolved quickly without needing a meeting in person, but care needs to be taken to ensure those older or security-conscious people without social media accounts can still be included.

Community gardening is undergoing something of a renaissance in Australia and around the world, as local governments begin to understand the benefits of urban farming. Some councils are even beginning to allow native plants on household verges, but still tend to discourage food production.

With so many new gardens popping up, and their establishment increasingly being encouraged as part of new developments, there’s likely to be one close to you. Just a few hours per week is enough to start and maintain a small plot, and a new generation of gardeners are usually welcoming and friendly.  Your local council or a quick online search will let you know where to find one that suits you, and the cost, if anything.

The humble capsicum ‘capsicum annuum’ and its close relation the chilli pepper share much of their history and genetics with tomatoes, and are also in the ‘nightshade’ category.

Originally from the Mesoamerican region and what is now Mexico, it too was brought back to Europe after Christopher Columbus’ travels in 1492.

His journey was driven in part by a European desire for peppercorns which were essentially a currency to themselves, and finding chillies already domesticated around 6000 years ago by the native populations was a pleasant surprise.

Like most of the South American foods we now take for granted, it was the Portuguese who widely spread capsicum around the world via their extensive trade routes, and now it is estimated up to 25 per cent of the global population eat capsicum or chilli daily.

Curiously, it only seems to be Australia, New Zealand and India that call it ‘capsicum’, with most other parts of the world calling it a ‘pepper’, with ‘chilli’ being reserved for hot varieties.

It also holds the unfortunate distinction of being one of the only fruits that is commonly used as a weapon (aside from the occasional thrown tomato), as the ‘capsaicin’ that produces the heat is a primary ingredient of pepper spray, with concentrations of around two per cent causing a burning feeling and temporary blindness. 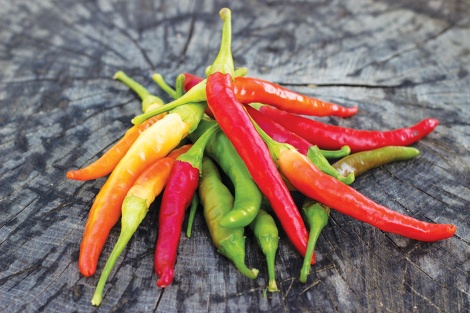 With capsicums being perfect for stuffing, and chillies being a great way to make bland food exciting, their enduring popularity is no surprise.

Growing them isn’t hard, and many pests will ignore them due to the capsaicin. Being similar to tomatoes, they require similar conditions, including as much sun as you can give them, regular watering and they can be staked-up to produce a neater plant that spends less effort supporting its own weight, instead growing big, juicy fruit.

While many people grow chilli plants in small pots, and capsicum plants are generally small enough to allow this as well, it needs to be a well-draining soil with plenty of nutrients and have sufficient space for a decent root system.

Like many nightshades, including tomatoes and eggplants, they respond well to the seeds being first sown in punnets or trays before being carefully transferred to the garden or pot.

Liquid fertiliser works well, and application once a week when the fruit is growing is sufficient.

A commonly overlooked fact is that all capsicums and peppers start out green before changing colour as they mature, and many complaints have been made to garden centres over the years by impatient gardeners who thought they’d mistakenly been sold a green variety.