POISON is suspected in the killing of 16 newly planted trees in Berringa Park on the Maylands riverfront.

Bayswater council CEO Andrew Brien says the trees were planted to provide shade and and create a wildlife habitat.

The council plants about 1000 trees a year to stave off the Perth-wide decline in tree canopy.

“Trees are a valuable asset to the whole of our community and the city will not tolerate senseless acts of eco vandalism,” Mr Brien said.

The council has had an independent arborist take a look at the trees, who found their condition pointed to poisoning and there was little hope they could be saved. 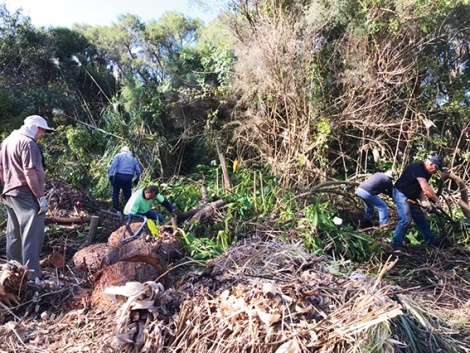 • Got a problem with trees? Take out your frustrations on invasive pepper trees while helping the Berringa Park friends (above), otherwise you might end up with this sign outside your house (below).

Under the council’s Urban Tree Policy a poisoned tree earns the neighbourhood a big shaming sign until a replacement is grown.

“The purpose of our group is to remove weeds and revegetate, so we’re not really that keen on people going along and killing trees, that’s for sure.”

“The new Berringa Park Friends Group is doing fabulous work down at the park – this is very disappointing,” she said. 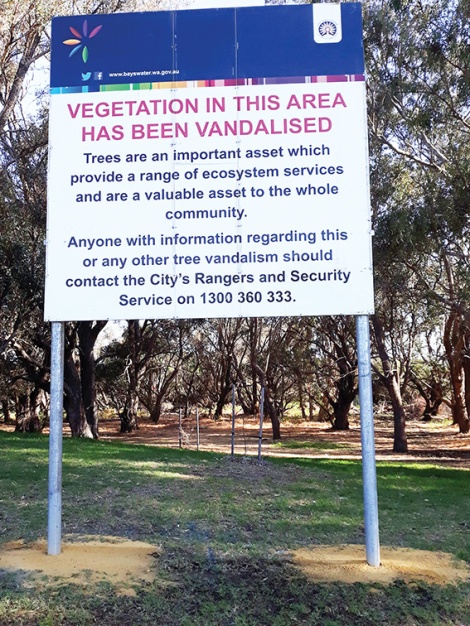 “The actions of this person or group shows appalling ignorance.”

Mr Pound says so far they’ve got through weeding about 5000sqm of Berringa, removing invasive pepper trees which strangle out native plants.

They have busy bees the third Sunday of every month. The next one’s on November 17 at 8.30am and people from outside the area are welcome if you’re keen to help.

“People come down and really get a bit of a dose of satisfaction out of it,” Mr Pound said.

“They’re not all nearby neighbours, some come from out of the area, some are in the direct vicinity and care about the river, but the overwhelming drive for the group is to actually get the environment back to where it needs to be.”

Their work moves along the river so the next weeding and planting spot gets listed at the Berringa Park Friends Group Facebook page.