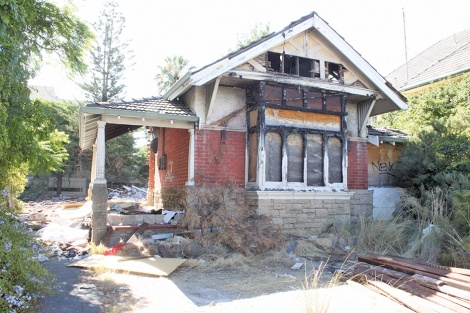 TWO heritage-listed West Perth houses and the former home of one of serial killer Eric Edgar Cooke’s victims are being demolished by the McGowan government.

The Post Newspaper reports that 24-year-old social worker Constance Lucy Madrill was murdered at 70 Thomas Street in Perth by Cooke on February 15, 1963. Cooke killed eight people (that are known) and was the last man hanged in WA. The Post has long ties to the Cooke murders, as editor Bret Christian was instrumental in gathering evidence that helped exonerate two men wrongly convicted for two of Cooke’s crimes; Darryl Beamish and John Button.

The two other houses on Thomas Street, numbers 66 and 68, were built in 1922 and are on Perth’s local heritage list.

All three are owned by the WA Planning Commission.

Empty for more than five years, they have long been earmarked for demolition to allow for street widening and the front third of each block is listed as road reserve in the Metropolitan Region Scheme.

Demolition was approved by City of Perth commissioners in March last year, but the approval carried a note that “council advises the Western Australian Planning Commission of its disappointment in relation to the rate at which the subject buildings have been allowed to decline and deteriorate to a point which their retention and re-use was unfeasible whilst under the commission’s ownership”.

Council staff declined to suggest any action beyond sending a disappointed note. Their report to commissioners states that given the road widening, future demolition is “inevitable”.

Since the two houses are only on the council heritage register and did not make the state list, “demolition by neglect” legislation introduced in 2019 wouldn’t apply.

The reluctant approval follows the demolition of 58 and 60 Thomas Street, approved in August 2016 and February 2019. In each case the property was neglected and a target for squatters and vandalism, and “approval was granted in recognition of the safety and security issues associated with the site”.

The WAPC told the council it tried “various security measures” against squatting and vandalism, but to no avail.

There’s no set date for the road widening and the site will get some landscaping in the interim. Two other occupied buildings will have to go as well.