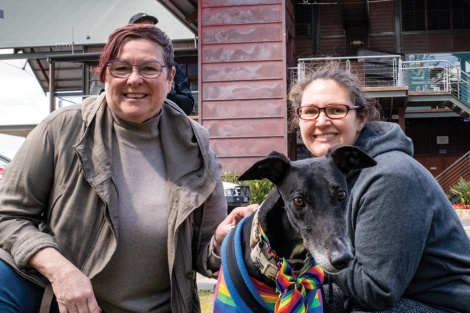 MOST sports around the country are shut down, but greyhounds in WA are still running every day without a live audience in race meets closed to the public. In this week’s Speaker’s Corner, Coalition for the Protection of Greyhounds’ WA divisional manager Andrea Pollard reminds us these animals are still being badly injured.

With the cruelty implicit within the industry now widely known, it’s a backward step which is bad for WA’s image.

Titanium Bolt was injured after a collision, so won’t race for 90 days like three other dogs hurt during a five day horror stretch in late March, with a fifth dog stood down for 42 days.

While the government claims WA has the safest animal welfare-wise industry in the world,

these unfortunate dogs are now being injured seven days a week for no other reason but human entertainment and making money.

Sunday race meetings are alternating between Mandurah and Cannington, so we’ll see more injuries at both tracks.

Neither place has used racing industry-funded research to make it safer for the dogs.

Meanwhile, research done by University of Technology Sydney in 2017 recommended straight tracks and six-dog races, instead of the usual eight to reduce injuries and deaths, yet nothing has changed.

With no action taken on this in WA, 21 greyhounds have suffered horrific leg fractures on the state’s racing tracks this year as of 31 March 2020.

Racing supporters like to say such injuries are inevitable in sport, just as in football. That makes no sense.

We don’t kill footballers when they break an ankle, yet that’s what they do to greyhounds.

Also, these dogs don’t choose to be professional athletes or get to bank their winnings.

Unnecessary deaths and injuries are inevitable in greyhound racing.

Anyone who’s come across one of these beautiful dogs will understand their kind gentle nature.

Greyhounds should be lying on couches, not running for their lives.