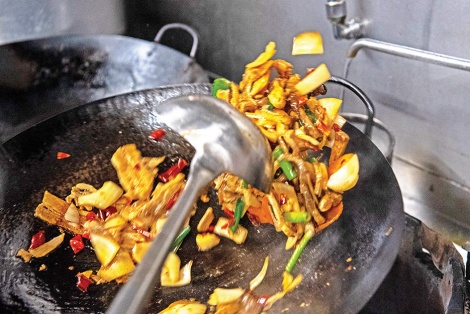 CHINATOWN has always been there in a food emergency.

There’s always something open in the Northbridge square, whether it’s 4am on a Saturday or on a public holiday (it’s become a tradition for many American Jews to eat at Chinese restaurants on Christmas Day).

So it was a grim picture when City Garden Chinese had to close its doors as the Covid-19 panicdemic hit, but thankfully they were still doing takeaway.

I’d invited a friend round for a night of cooking way back in February 25 when another emergency hit Perth – a freakishly severe storm.

My place was flooded, her place had no power, and cooking was looking unlikely.

Very little was open, but Chinatown was a glowing beacon of hot food.

At 10pm on a Tuesday night, City Garden was still pumping – the outdoor and ground-floor tables were full – but the staff found us a spot upstairs.

The menu is broad by most restaurant’s standards, but brief for a Chinese (it’s not got hundreds of dishes like Uncle Billy’s legendary sprawling menu). I fancied oyster kailan, but I’m not a big fan of fishy greens, and the chef was happy to do a garlic-based version ($14.80).

It was crunchy and refreshing; a nice pitstop between the heavier-hitting dishes.

The chilli and vinegar chicken ($17.80) had crispy skin and juicy innards, and came with a biting thin sauce.

The generous amount of chopped chilli makes it personably hot – you can scoop up a bunch with each bite or leave it behind if it’s getting too spicy.

The salt and pepper bean curd was a nice savoury interlude between the rainbow of flavours, and I swished them around in surplus sauces from other dishes.

The Peking ribs ($17.80) are slathered in a rich, sweet sauce, just this side of sensory overloaded.

The super tender meat is served on the bone, although it’s not the rib cut I was used to in Texas barbecue, with all different sizes and shapes.

Even though we felt full, we couldn’t leave any of the ribs behind – they were that good.

The food’s so fresh and finely balanced that I was full to the brim, but wasn’t feeling gluggy, just grateful we have eateries that eschew Perth’s conventional 5.45pm – 7.15pm dining hours.

And City Garden is great value – for about $70 for two people, I had enough leftovers for lunch and dinner the next day.