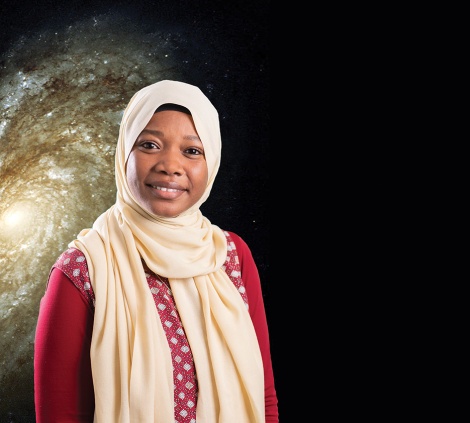 MOST people only think of dust when it’s spring cleaning time, but a Maylands astronomer says without a special kind of dust we might never get to enjoy a beautiful starry night.

Omima Osman is a final year PhD candidate at UWA where she’s spent the last two and a half years researching cosmic dust, which she believes is a critical building block for new stars.

Cosmic dust is made up of tiny particles formed by dying stars which hang in the space between stars and galaxies. The particles are so small they appear like a gas.

Ms Osman, who graduated from Sudan’s Khartoum University, then moved to Italy to obtain postgraduate qualifications in physics and cosmology, says just like regular dust, cosmic dust can be a pain.

“Dust gets in the way [of telescopes] as clouds get in the way of the sunlight,” she said.

But without it, new stars could not form.

“Dust has a crucial role in star formation because it helps in creating the material (molecular hydrogen) from which stars are formed,” Ms Osman said.

“From this point of view, dust is very important in building up galaxies and could considerably influence their evolution.”

Cosmic dust isn’t the gunky sort you get on grandad’s boxes in the attic, but it’s more familiar than you might think.

Just before dawn or after sunset, an eerie cone of light can often be seen. Particularly common in spring, this “zodiacal light,” is created by sunlight reflecting off dust grains circling the inner solar system.

To Ms Osman, understanding dust is a crucial part of astronomy.

“My research is all about cleaning our window to the universe of cosmic dust so that we can more clearly see and understand the universe.

As the window gets cleaner, the importance of the dust becomes more and more apparent. New research is revealing how dust helps to form very complex organic molecules. A relatively new field of research, astrobiology, is exploring how this might be linked to the creation of life itself.

Lots of people want to make a song and dance about cosmic dust — quite literally. The International Centre for Radio Astronomy Research (ICRAR) is running a new competition that invites writers to celebrate WA astronomy through song, monologues, dance, puppetry performances, or poetry. Entrants can base their entries on the work being done by one of 10 researchers, including Ms Osman.

She thinks the competition is a great idea, because for scientists,“art has always been a part of our world just to translate what we are doing”.

Claire Bowen, who is working with ICRAR to organise the competition, agrees: “Separating the arts and sciences is an arbitrary dichotomy – you only have to look at Leonardo da Vinci, who was both a scientist and an artist.”

She points to the artistic membership of the ICRAR team as more evidence; two are improv comedians, two are songwriters, and one is a poet.