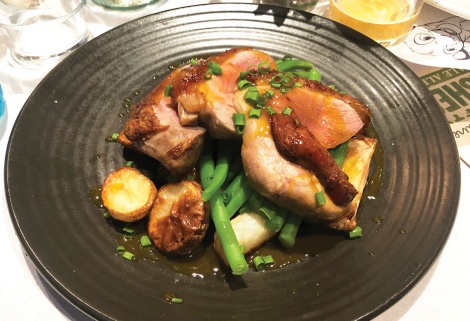 As my wife drove through Perth CBD, I looked out the car window and saw a 1000ft statue of Basil Zempilas looming over the city.

Perched on his chest was Steve Mills, rubbing brasso into Basil’s bronze nipples and mayoral chains.

“No,” I mumbled as we pulled into the Inglewood Hotel car park. “It can’t be true.”

As we walked through the Inglewood Hotel, men in cherry-red berets were zooming about.

I was a bit confused until we sat down at our table and saw there was a special menu to celebrate Bastille Day (Tuesday July 14).

It was a nice touch and added some joie de vivre to the buzzing restaurant, which was packed to the gunnels during school holidays.

The small menu had all the hotel classics (burgers, pie, parmi and the odd curveball like cajun crusted salmon) and the Bastille menu included beef bourguignon, duck a la orange and some French vino.

The service was superb throughout the night and the young waitress offered to get some colouring-in books for our kids and made sure their meals came first.

She didn’t try and fleece us on the drinks and got them kids lemonades instead of adult ones.

As we waited for our food I had a snoop around: the hotel lounge was quite plush with designer lampshades, a nice carpet and contemporary artworks hanging on the walls. It felt modern but quite cosy, and diners were laughing and having fun. There was a good vibe about the place.

The waitress was soon back with my duck a la orange ($28). 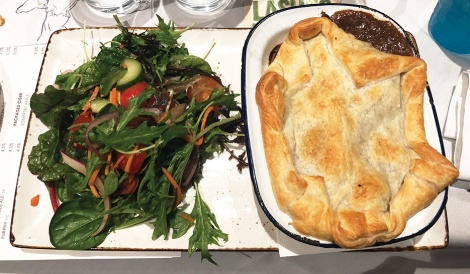 I was hesitant about ordering this dish, as growing up in the UK it was somewhat of a 1970s cliche (dreary couples in middle England enjoying Mateus Rose and duck a la orange was the height of sophistication back then).

It became one of those so-naff-it’s-cool dishes that Heston Blumenthal would reinvent by stuffing a Terry’s chocolate orange up a duck’s bottom and then freezing it with liquid nitrogen.

Anyway, I took the plunge and was rewarded for my courage – it was amazing.

The dark meat was cooked to perfection, and the subtle orange sauce wasn’t cloying and had a pleasant sweet-sour tang.

Nestled underneath were some green beans, roast turnips and baby potatoes, adding the requisite crunch. A fantstic dish with loads of duck meat and subtle flavour.

Across the table, my wife was enjoying her old-school treat – a beef, Guinness and mushroom pie ($23).

“The gravy is the star of the show – thick and packed with flavour it’s great for a winter’s night,” she said.

“The flaky pastry is spot on as well, and the chunks of beef are nice and tender. A delicious authentic pie”

My wife opted for salad instead of chips, and said the heap of fresh greens was a refreshing alternative.

Talking of chips, the little rascals were busy demolishing their fish and chips (kids menu $10).

I had a sneaky taste and can confirm the light, golden batter was yummy and the thick fillet of fish fresh and moist.

Everything at the Inglewood Hotel was spot on – the food, service and ambience – and I could see why the carpark was chockas on a Tuesday night.

It’s serving up restaurant-quality food in a pub setting.