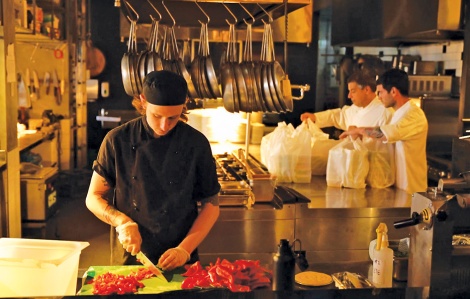 Local cafes and restaurants have swung into action to help vulnerable people through the Covid crisis.

Over the next three months, the St Pat’s team will deliver over 100 meals a night to those in need, prepared by local restaurants La Sosta, The National Hotel, Benny’s and Ronnie Nights. Recipients will also get access to other St Pat’s services such as mental health and housing support.

The first phase from April to July saw volunteers deliver more than 15,000 meals. In the second phase, the project will collaborate with Uniting WA to expand into the Perth area. The meals are paid for by the Minderoo Foundation and Freo Ports, with additional support from Lotterywest, the McCusker Foundation, Fremantle Chamber of Commerce and the City of Perth.

The program was the brainchild of St Pat’s CEO Michael Piu, who wanted to provide relief to those left particularly vulnerable by COVID-19 whilst also helping local businesses left without customers.

Benny’s managing director Ivan Dzeba said it helped staff who were called back to “put bread on the table”.

“When the program first started, there was nothing else going on – we were shut.

“It was a lifeline for some of them in that respect.”

The program will continue to be rolled out even as businesses get back on their feet, with St Pat’s under increasing pressure from a growing client list. Its fundraising coordinator Melanie Watkins, says the program revealed the extent of  food insecurity in our community.

“Without the doorstep dinners, some of the people now receiving meals would not be eating at all, or eating little more than a slice of toast” she told the Herald.

While there were many reasons they might be calling on St Pat’s, the meals could be life-changing, Ms Watkins said.

“People are reporting back that they have increased energy, that they want to get up in the morning.”

Mr Dzeba said one elderly woman came into Benny’s to thank the staff personally, after working out who’d provided the food in the anonymous box.

“She was in tears. It was incredible to see how such a little thing makes such a huge difference,” Mr Dzeba told the Herald.