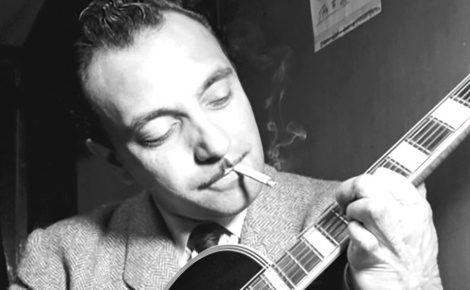 DJANGO REINHARDT is best known as the founding father of gypsy jazz on the acoustic guitar, but a Perth band is shining a light on his lesser-known electric recordings.

The Electric Django Quintet focus on Reinhardt’s later years in the 1940s and 1950s, when he was inspired by be-bop and replaced his conventional string quartet with an American style line-up of electric guitar, drums, piano, horns, clarinet and piano.

After World War II, Reinhardt went on a tour of the US and was impressed by some of the new jazz performers on the scene.

“He heard players such as Charlie Parker and Dizzy Gillespie and was blown away by their fluidity and improvisational concepts and started to incorporate more of that sound into his playing,” says Lachlan Gear, guitarist with The Electric Django Quintet.

“The electric guitar also freed up his technique as he could play a lot louder and could now compete sonically with a standard jazz rhythm section format including piano, drums and horns as opposed to his previous all string quintet.

“This allowed him to be more free, creative and spacious in his playing but also play really fast lines that would otherwise have been too quiet on the acoustic.”

After Reinhardt returned from the US, he continued to play electric sets in Paris clubs, but he became increasingly unreliable as he embraced his free-spirited Romani lifestyle.

Gear says one of his favourite Reinhardt performances is his electric version of Les yeux noirs, where he does some proto-shredding: “he plays one of the most technically perfect and burning solos I’ve ever heard him play at a very ridiculous tempo. That solo is one all Django aficionados aspire to be able to play one day.”

“Django is definitely most well known for his acoustic work with Stephane Grappelli and the quintet of the hot club of France, but he actually has a huge catalogue of material he did on the electric.

“It’s nice to showcase some of this lesser known material as there are some really interesting and modern sounding things he did that go way beyond the standard gypsy jazz mould.

“We are playing an eclectic repertoire, some of his later be-bop inspired tunes, some be-bop re-workings of his earlier gypsy repertoire…and a number of tunes from the guitar greats he inspired including Wes Montgomery, Bireli Lagrene, George Benson and more.”