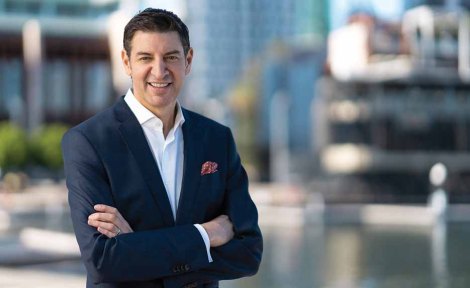 ‘Behind these numbers are the very real stories of people who have fallen through the cracks.’

Mr Zempilas’s “Pop-up Places for Homeless People” policy is based on a recently-trialled Brisbane model developed by the not-for-profit group Beddown, and has received qualified support from advocates and business owners.

Each night when office workers head home, Beddown volunteers set up blow-up mattresses and bedlinen to provide a safe place for homeless people to bed down. Support services such as counselling and health checks are also made available.

Mr Zempilas, who’s been briefed on the issue by homeless services, supported the McGowan government’s “Housing First” program but says there’s a lag before people get a permanent roof over their head, whilst emergency accommodation like St Bart’s and The Beacon is overflowing.

“If there are no beds there, people end up on our streets,” Mr Zempilas said.

“I aim to adopt the approach or partner with Beddown, from Brisbane, to turn our carparks into safe places for people who are homeless to take refuge from the cold and the danger of sleeping rough.

“It works in Brisbane, it can work here.”

Mr Zempilas said lockers would be provided to people using the car parks at night so they could store their belongings during the day, which helps prevent them being stolen or destroyed, and stops nooks and crannies in the city getting clogged.

The media star’s new approach comes as a stark comparison to a column last year when he spoke of forcibly removing homeless people from the CBD: “The look, the smell, the language, the fights – it’s disgusting,” he wrote.

The turnabout caught one homeless advocate on the hop: “That’s not the worst idea around,” he said with some surprise.

Shelter WA CEO Michelle Mackenzie was aware of Beddown’s initiative through a national homelessness network, but says she’d be wary of deviating resources away from the Housing First model, which has a proven track record overseas.

She says the carpark model might also struggle to provide a suitable place for extremely vulnerable young women – particularly those from Indigenous backgrounds – if it put them in close quarters with people who might trigger responses from previous trauma.

Ms Mackenzie said Victoria and New South Wales had taken all rough sleepers off the streets during Covid-19 and provided them with accommodation in under-used hotels, and had recently invested more money into the system with the aim of getting people into housing before they ended up back on the streets.

While the McGowan government tried that at the Pan Pacific hotel, Ms Mackenzie said despite the manager’s “heart of gold” the hotel wasn’t suitable to cater for its unusual clients’ needs. But she says it’s an option the government shouldn’t abandon.

“It’s a solution that has a bit more dignity than a carpark,” she said.

A local commercial landlord who’s had homeless people camped outside one of his properties “for a couple of years on and off” says having somewhere to refer them would be a huge relief.

Despite being sympathetic to their plight, he said he was regularly finding syringes, drug sachets, rotting food and faeces outside his building. “I was literally dry retching cleaning it up on Monday,” he said.

He’s sought help from police, but has been told they won’t intervene until a crime is committed, while the security company he hired won’t let its staff go near the homeless group because of threats.

The owner, who didn’t want to be named, said tenants have been actively trying to break long-term leases because of the mess they have to step over every time they arrived for work, which would be devastating for his “mum and dad” investors already struggling because of Covid-19 business closures.

“How they are going to administer it is up to them, but the concept of having somewhere you can direct people to – if someone is coming up with a pro-active approach to move these people to somewhere in an evening, that’s really great.”