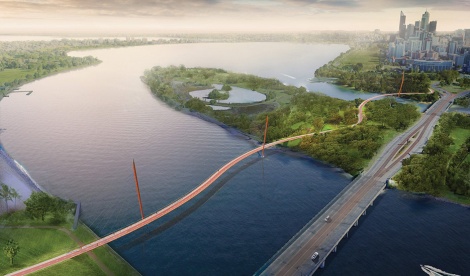 An artist’s concept of the new bridge.

A NEW pedestrian and bike bridge across the Swan River will be constructed west of the Causeway, linking the CBD with Victoria Park.

The McGowan government’s spending about $50 million on the new bridge which will have a six-metre wide path and dedicated cycle and pedestrian lanes, marking a shift away from the principal shared-path battle royale model.

Bike advocacy group WestCycle’s welcomed the announcement saying it fixes one of the big bottlenecks for riders commuting to and from the city.

The Causeway’s often chockers with 1400 cyclists and 1900 pedestrians each day, crammed into the narrow path beside the busy roads.

Perth state Labor MP John Carey told us “this is brilliant for our city for so many reasons.

“The first is it’s fixing a critical congestion point on the Causeway bridge… this new bridge is just for cyclists and pedestrians, and it’s separated lanes, so it really is the best and safest way for large numbers of people to cross.”

Mr Carey says it’ll also bring more people to a part of East Perth that’s in need of enlivening, and the arty design is intended as a drawcard itself with Aboriginal history and culture woven in.

He says adding onto the Causeway was considered, and while that was a cheaper option it had a few problems.

“The Causeway bridge is estimated to have another 20 or 30 years in it, but a new bridge will be likely built after that at a higher level.”

The Causeway is very low to the water and has only a tiny clearance for boats (or floods), and it’s due to be replaced in a few decades anyway.

“We really thought a purpose-built, iconic bridge that’s a tourism drawcard was a better investment than a $20m spend that’s adding to infrastructure that has to be replaced.

“I love that it’s another drawcard, an activator for the east end of our city.”

The initial concept’s been done up in consultation with the Wadjuk working group, and they’ll be kept on board through the final design. It’ll have design elements inspired by Aboriginal historical figures Yagan and Fanny Balbuk.

Yagan has a statue on Heirisson Island, and Balbuk was born in the shallow waters of Matagarup before land reclamation raised Heirisson Island. She would often walk the route from her birthplace to the swamp where the Perth train station was built, not altering her path even as buildings and fences sprung up on her land.

It’s intended as a New Deal-style stimulus works so the McGowan government’s pledged to have the work done by WA companies and the steel fabricated here, and tenders are due to go out in 2021.