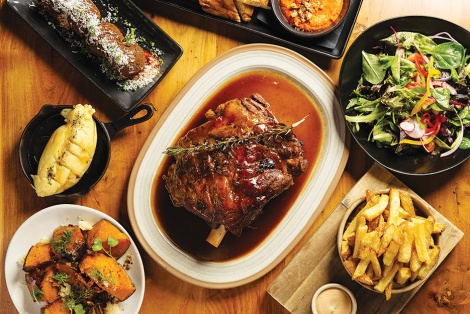 IF my recent dining experience in Perth is anything to go by, the inner-city restaurant scene is bouncing back following months of uncertainty.

I tried to get a table at three different restaurants and they were all fully booked – a great sign for the local hospitality industry, but annoying for me.

I was catching up with two old school friends who put me in charge of finding a restaurant close to The Comedy Club, where we were going after our meal.

Thanks to Google Maps I was reminded of The Stables, a place I’ve been wanting to try for years.

In case you’re wondering about the name, the restaurant building was originally one of the first horse stables built in Perth in 1894. This multi-level building has a basement for functions, a bustling bar and casual eating area, and an elegant dining space upstairs with bentwood chairs, equestrian-themed art, and magnificent wooden beams which I suspect are an original and have survived endless renovations over the past century.

I was grateful my dining companions were easy going foodies and we quickly agreed on some dishes to share.

As far as plates go, let’s start with the weakest link and work our way up to the best.

The beef brisket sliders ($20 for three) were smoky and cheesy and I appreciated the well-toasted brioche buns that weren’t too dry.

All the right flavours were there, but the minuscule serving of brisket was disappointing. I had to open mine up to double check they didn’t forget it.

The croquettes were cubed-shaped and packed full of creamy al dente macaroni with a strong parmesan flavour that really packed a punch. Simple stuff, but a real treat.

The menu says truffle oil, but I’m always suspicious when it is included on a menu.

An earthy truffle flavour was missing in action. There’s no need to include something so luscious in a pedestrian offering like Mac & Cheese anyway.

Next up were four delicious barramundi fillets ($18).

The fillets were moist and flakey and the tempura batter was light and crunchy.

The crowning dish of the night was a stunning beetroot gnocchi ($32). The dish is deceiving and looked like a fruit salad – the magenta-coloured gnocchi looked like watermelon, the sweet potato cubes looked like rockmelon and the dill could have been mistaken for mint. It was a tremendous dish packed full of flavour thanks to the tangy goats curd. The walnuts added texture and a squirt of lemon gave it a zesty kick.

I’m already eyeing them off for my next visit.